Holmwood's success a reward for excellence 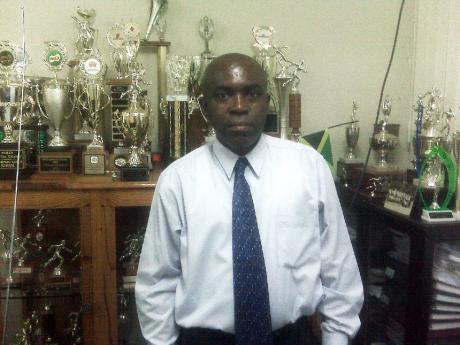 Holmwood's principal Paul Bailey stands amid their trophy collection in his office at the Manchester-based school. - Photo by André Lowe

Holmwood Technical has made a habit of lifting the girls crown at the ISSA/GraceKennedy Boys' and Girls' Championships and Paul Bailey, principal of the Manchester-based school which will today host The Gleaner's Champs 100 Tour, highlights that their success is as a result of an expensive but rewarding investment in their students through sports.

Bailey, who has spent almost his entire life at the institution - first as a student - also took time to point out that their Champs success is a matter of great pride for the entire com-munity and not just the immediate school family.

"Over the years, our success has helped us to improve in terms of our academic performance. It's really a case where the students feel better about themselves and about their school and realise that the sky is the limit," Bailey said.

"It's (success) a big deal to the entire community ... if you notice, each year that we win, we take our celebrations to the street to celebrate with the people because it means a great deal for us at the school but also to everyone else in the community," Bailey added.

The seven-time champions will welcome back MVP Track Club star and World Championships 200m finalist Anneisha McLaughlin to her old stomping ground, as the athlete, along with a string of popular artistes, get set to endorse the tour's message of fair play and commitment to hard work.

Corporate giants GraceKennedy, VMBS and LIME have partnered with the media heavyweights on the project and Bailey can hardly wait.

"In Jamaica, we don't take enough time out to celebrate the good things. We put too much emphasis on the bad things, so this is a chance for us to celebrate something good and we are happy that Holmwood is a part of it.

"This tour will help to motivate the kids more and will cause those who have left already to be proud of their alma mater. Everyone is very excited about this."

The 100th staging of ISSA/GraceKennedy Boys' and Girls' Championships is scheduled for the National Stadium from March 24-27.