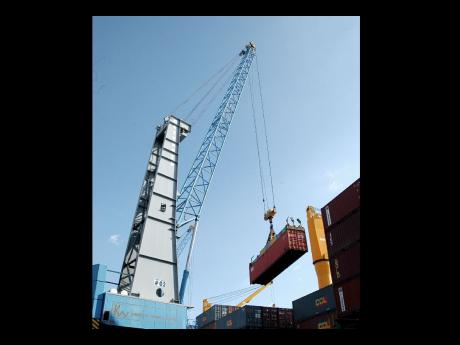 M
inority operators
on the Port of Kingston, the listed Kingston Wharves Limited (KWL), will be looking to today's start-up here in Jamaica of the new Caribbean hub operations of the Oslo, Norway-based mega shipping line, Hsegh Auto-liners, for a lifeline to stem an ongoing business fall-off highlighted by a
whopping near 94 per cent plunge in net profits last year.

The National Commercial Bank (NCB)-controlled KWL reported, in its recently released final-quarter financial results for 2009, that net profit deteriorated 93.7 per cent to $10.39 million in 2009, from the $165.9 million it reported at the end of 2008, even though its revenue decline was minimal. Profit was dragged down largely by a more than 265 per cent jump in KWL's tax obligations, which leapt from $51.5 million in 2008 to $188.3 million last year following the 2008 wrap-up of a major expansion project at that section of the port.

"The capital projects which we were doing are now complete, so whatever (tax) allowances we got are now expired," KWL's Chief Execu-tive Officer Grantley Stephenson told the
Financial Gleaner
.

But the cargo-shipping handler is in line to benefit from a major government-brokered deal under which motor vehicle specialist carrier, Hsegh Autoliners, has decided to relocate its Caribbean hub operation from San Juan in Puerto Rico to Jamaica, starting today.

The Kingston hub, with terminal services being handled by KWL, is said to form the basis for Hsegh Autoliners' Caribbean expansion plans, which involve a partnership with the Trinidad-based freight forwarding, marine insurance and logistics services company, Inter-national Shipping Limited. Hsegh Autoliners specialises in the transport of new and used motor vehicles, high and heavy loads like buses, tractors, trucks, cranes, road-construction machines, earth-moving and other equipment, with much of its cargo being loaded in Europe.

The Norwegian ocean transport specialist is said to be deploying to KWL's expanded and deepened port as of today its newly built
Hsegh Caribia
, a 140 metre-long vessel with a ramp capacity of 100 tons and capacity to handle a maximum load height of 4.8 metres.

Departing from Kingston, the regional service will include Suriname, French Guiana, Guyana, Trinidad and Tobago, Cuba, the Dominican Republic and Venezuela. San Juan is now to be used for trans-shipment to the United States via Jacksonville, Florida.

Stephenson declined to divulge other details of the new arrangement, including the anticipated income, as well as whether and how the business would be split between KWL and the government-owned Kingston Container Terminal, which is operated by the Port Authority of Jamaica, that handles about 80 per cent of all activities on the port. Details of the deal, he said, would be revealed by the transport ministry today.

But the increased business, which the KWL boss estimates will see between 15,000 and 20,000 vehicles being transported throughout the region, is expected to ameliorate the negative impact the company's performance has suffered, from what Stephenson said was a 50 per cent fall-off in business last year.

The closure of one of three warehouses and other cost-cutting measures were put in place in a continued effort to reduce costs. The KWL boss also indicated that efforts have been under way to secure cheaper sources to refinance its debt, which stood at more than J$2.8 billion in 2008.

But amid the financial performance and profitability decline, KWL reaped benefits in the last quarter from the relative stability of the Jamaican dollar translating to a major ease in interest it paid on the US$26.6-million loans it used to undertake the recent berth expansion at the port. Finance cost fell all of 80 per cent to $53.7 million for the final three months last year from the $270.6 million KWL paid in the quarter ending December 31, 2008.

The capital expansion boosted the entity's competitiveness, improving the performance of subsidiaries in the process, its management reported, with Harbour Cold Stores Limited and Security Administrators Limited growing revenue in the last quarter last year compared to the year before.