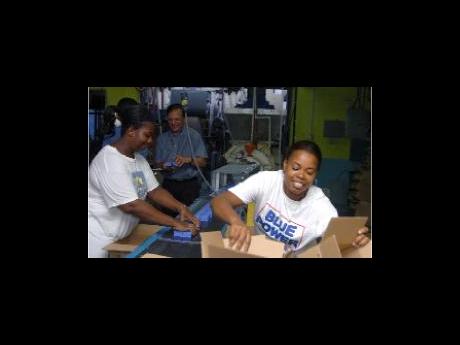 Dr Dhiru Tanna managing director of Blue Power Limited is seen in this file photo with two of his employees. - File


THE JUNIOR Stock Exchange, created last year as a vehicle to raise capital for small Jamaican firms, is to haveits second listing, with Blue Power, a lumber operation and soap-manufacturing business, set to enter the public equity market in two or three months' time, its principal has said.

The new listing comes four months after Access Financial became the first and only company to be listed on the junior market.

"Within the next 60 to 90 days, we expect to go to the market. At the moment, we still have some work to do, but (we) expect to submit the prospectus to the stock exchange for review shortly," Dhiru Tanna, managing director of Blue Power Limited, told the
Financial Gleaner
this week.

While Tanna said he was not able to disclose details of the offer, he noted that the company would be looking to raise less than $100 million.

Tanna operates two companies which are involved in soap manufacturing and lumber production, with the soap-making concern posting annual sales of more than $120 million a year, while the lumber-producing entity garners between $40 million and $50 million per annum, he said.

The company is to be listed as a group operation with the two distinct business lines.

Mayberry Investments Limited, which acted as broker/financial adviser to Access Financial, will also handle Blue Power's listing. It will be joined by JN Fund Managers as the selling agent.

The Junior Stock Exchange was launched last April and is targeted at small and medium-size companies with a capital base of between $50 million and $500 million. Access Financial, in its initial public offer (IPO) of 5,490,199 shares, raised $100.195 million from the equity market. The company last traded at $28 with market share valued at $768.6 million.

According to Tanna, the cash to be raised from its IPO will be used to improve the efficiency and competi-tiveness of his company, with the bulk of any funds raised set to be ploughed into the manufacturing operations.

"We will use the funds to acquire additional machinery, raw and packaging materials for soap manufacturing," said Tanna.

He said the plan was to double soap sales within two years.

The company is said to produce approximately 120,000 cases of soap per year at its 8,000-square foot plant located on Victoria Avenue in Kingston. It entered that market in 2002. It earns about half its revenue making products on contract for bigger suppliers such as Grace-Kennedy, Lasco, HD Hopwood and Barco Caribbean.

The lumber operation is located in Papine, St Andrew.

Since the launch of the junior market, stock brokers have been actively preparing companies to list. In July last year, the Jamaica Stock Exchange (JSE) embarked on a formal initiative to position and prepare small- and medium-size companies for listing.

"We have at least four companies in near shape ready for listing, that is, the stage of the prospectus being available for review," said Marlene Street-Forrest, JSE general manager.

"We have reviewed one already, and by June we expect to have at least four more companies listed. Two are imminent and two others are in the bag," she added.

Street-Forrest said that by the end of the year the exchange expects to outperform the target it had set itself to have six firms trading on the junior market. She said a total eight, including Access Financial, should be listed by then.

"We have had a flurry of interest from reputable companies that investors can relate to and ones that we feel will set the tone for further listing," she said.

The JSE general manager said interest was being shown by a diversified group of firms spanning manufacturing, agricultural pro-cessing and the beverage industry.