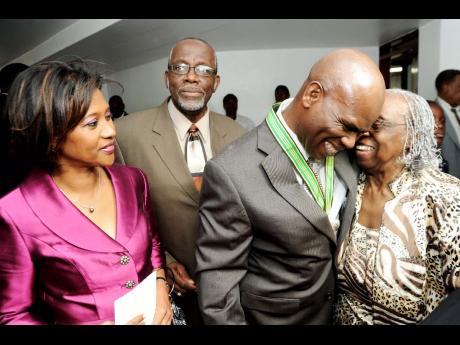 Sonia Fuller (left), wife of the custos, and Bishop Rudolph Daley (second left) look on as Steadman Fuller, custos rotulorum of Kingston, gets a hug from Custos of St Andrew Carmen Stewart after his installation ceremony at the Jamaica Conference Centre, downtown Kingston, yesterday. photos by Ricardo Makyn/Staff Photographer

Ten-year-old Moesha Gayle said she wasn't invited, but attended to publicly remind the new custos of Kingston he has very big duties ahead of him.

The Calabar Primary and Junior High student kept Steadman Fuller well grounded, as she lectured him through poetry in front of approximately 700 people.

"Dem neva invite me, but I still deh yah," she said. "You try memba is di (governor general) appoint yu at fi him pleasure.

"Suh nuh badda neglect yuh duties an' tink yuh can hold dis office forever," she recited to the delight of the crowd, while staring at the custos during his installation ceremony in Kingston yesterday.

Fuller smiled as he recalled childhood dreams of becoming a teacher, never custos.

"Education was very important to me," he said with a nod, "and still is."

Fuller was born in St Catherine and moved on to gain his LLB (Hons) degree from Huddersfield University in the United Kingdom. He also graduated from the University of the West Indies and The Mico University College.

He is Kingston Bookshop's chief executive officer, co-founder of the Book Industry Association of Jamaica, and director of Fullon Properties and Rockstead Farms Limited.

During the ceremony, Prime Minister Bruce Golding not only acknowledged the new custos' achievements to date, but also commended those committed to downtown Kingston's development.

In his reply, Fuller said: "I have a dream of a renewed and energised downtown Kingston."