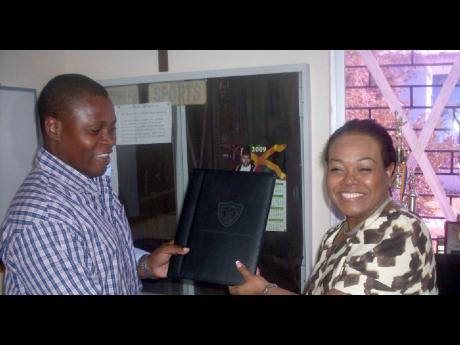 The Florida chapter of St Catherine High School (SCHS) Past Students' Association decided to touch the lives of students attending their
alma mater
in Spanish Town. This institution has graduated many successful people, including current Minister of Education Andrew Holness. But it has remained in the shadow of schools like St Jago High.

So, a group of past students got together in Florida and decided to remedy this. Anthony Thompson (Class of 1979) decided to establish the St Catherine High School website. From that came the first reunion, held in Florida in October 2009. These past students could have rested on their laurels after making that event a success. But they had a desire to elevate the status of the school that made them excel in their various fields.

So, on February 19, at the launch of the St Catherine High School Foundation, the brainchild of former principal Joan Tyser Mills, the Florida chapter of the past students' association sent a delegation to mark the event. What an evening it was! Held at the conveniently located Hilton Kingston Jamaica hotel in New Kingston, it was an evening of pride for the attendees.

The launch was attended by approximately 200 people, including current principal Marlon Campbell; past principal Sister Mary Paschall; Minister of Education and past student Andrew Holness; past student Dr O'Neal Mundle; Sister Jasmine Clarke-Barnes; president of the Florida chapter of the SCHS past students' association Courtney Hay; and others.

Holness pledged $250,000 of his own money and promised to raise another $1 million to add to this.