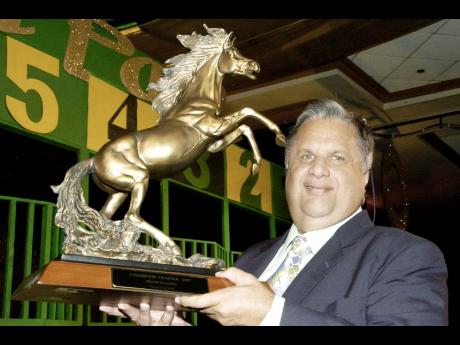 AHWHOFAH was last night named 'Horse of the Year' at the 21st annual None Such Awards Dinner at the Terra Nova hotel, Waterloo Road.

As a four-year-old in 2009, the Wayne DaCosta-trained AHWHOFAH, by Royal Minister out of Executive Profile, won five grade one trophy races under heavy imposts to be crowned the top horse.

She was also named champion sprinter for the second consecutive year, champion middle-distance performer, as well as champion local-bred horse and champion 4-y-o and up, to sweep the major awards for her owner/breeder Winston Kong.

Meanwhile, the coveted None Such Award for lifetime achievement went to veteran owner and breeder Alexander Hamilton, whose association with racing spans 60 years.

A Scotsman by birth, Hamilton, who owned horses such as the 1969 'Horse of the Year' PERSIAN COIN, LONG SHOT and the 1970 St Leger winner CHARLOTTE RUSSE, served as president of the Jockey Club of Jamaica from 1972 to 1984. He was instrumental in allocating lands he owned (Caymanas Estates) to certain business interests for the building of Caymanas Park in 1959.

Recipients of other awards are as follows:

Champion Grooms - Keith Cornwall and Kimalee Wells with 11 wins each