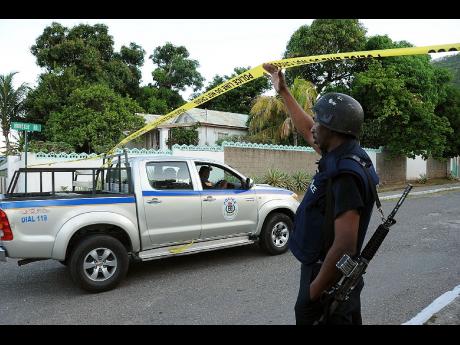 AS THE Jamaica Constabulary Force (JCF) seeks to come to terms with the massive east Kingston weapons and ammunition discovery on February 4, a rank-and-file policeman is calling on the authorities to urgently put in place closed-circuit television (CCTV) in police armouries islandwide.

The policeman, who appealed to
The Gleaner
not to divulge his identify for fear that his comments could precipitate a backlash, said CCTV is long overdue in super-sensitive areas such as the armouries.

"We have known for a long time that illegal weapons, which were seized by the police, have a way of finding themselves back on the streets in a matter of days," the rank-and-file policeman told
The Gleaner.

"We, therefore, should not have waited until we were embarrassed in this way before we began to jump around like headless chickens," he lamented.

The policeman complained that it was well known to those in charge that police personnel had free access to the armoury, giving corrupt cops
carte blanche
to carry out their nefarious activities.

"We knew, people on the streets knew, then why wasn't something done about it?" he questioned.

Only days ago, the integrity of persons manning the armoury came under further public scrutiny when a policemen unearthed another weapon, which was taken from the streets last year.

The 9mm Bereta pistol, which should have been destroyed last year, was again seized by the police during an operation in north St Andrew.

Four persons, including a police sergeant, have been arrested and charged in connection with the guns and ammunition seizure on Munster Road, off Mountain View Avenue, St Andrew.

David Blagrove and Charles Morris, civilian workers in the JCF armoury and stores division, have been slapped with similar charges, while Garnett Pennington has been charged with one count of illegal possession of firearm and ammunition and one count of aiding and abetting storehouse break-in and larceny.

Former National Security Minister, Dr Peter Phillips, told
The Gleaner
that the integrity of the security system at the armoury was as strong as the people monitoring the facility.

Last week, Permanent Secretary in the Ministry of National Security Richard Reese told new policemen coming into the system that controlling corruption from the departmental level required a strong leadership organisation, because corruption could take place anywhere in the force.

"The top administrator must make it clear from the start that he and the other members of the department are against any form of corrupt activity, and that it will not be tolerated in any way, shape, or form," Reese said.

He warned that this lack of action could even assist in increasing corruption, because officers would believe that no action would be taken against them.

But the policeman charged that this was easier said than done.

"Members who are determined to serve the vested interests of the people of Jamaica have, in recent times, been chastised and dismissed for taking a firm stand against corrupt practices, and it is noticeable in some of the dismissals in recent times," he said.