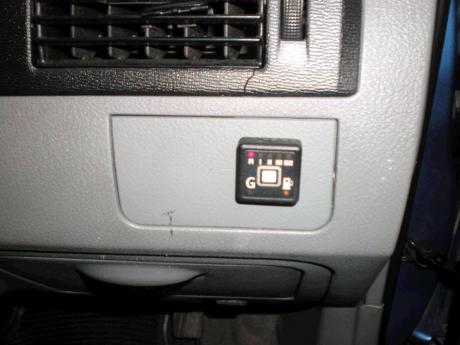 The only additional cockpit control added: known as an interchange switch, it allows drivers to select the type of fuel used. 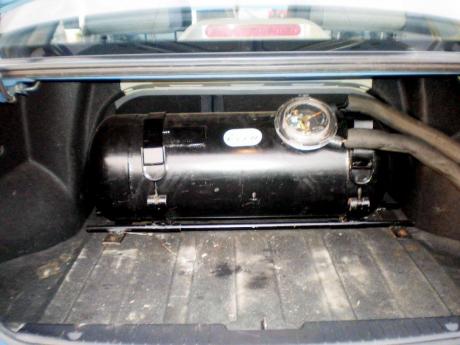 A 60-litre tank only filled with 50 litres of gas to allow for expansion. The tank is firmly bolted to the tank floor; safety valve, return and filler lines seen in place. 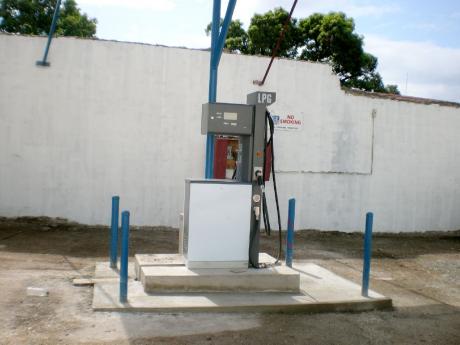 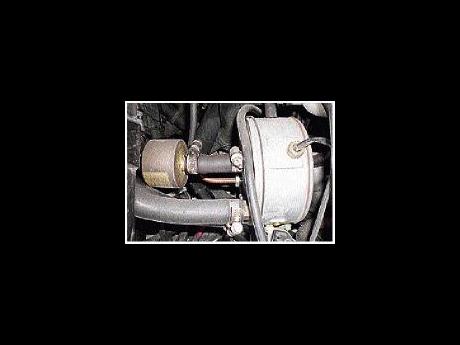 Device which separates condensate from fuel, fires the LPG injectors and shuts down fuel supply in case of frontal impact. 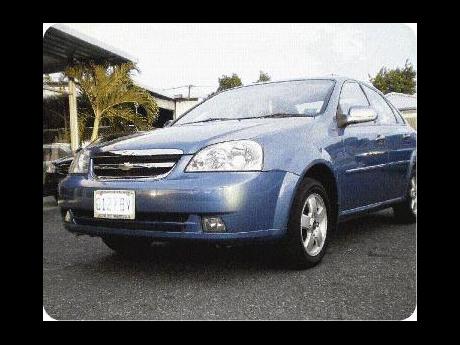 The 2004 Optra, used as developmental mule for the LPG programme, has logged 70,946 kilometres of testing. 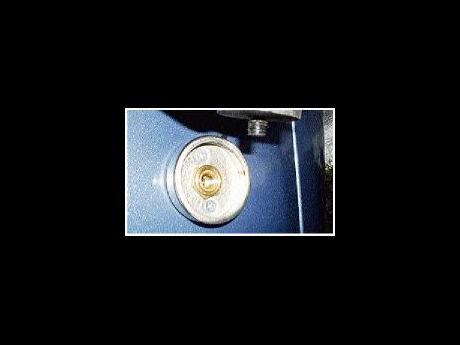 Filler receptacle for LPG nozzle. It is a drybreak-style connector that is affixed to the rear bumper of the vehicle, usually under the regular gas receptacle. A 50-litre fill-up takes less than two minutes, according to Challenger. - Photos by Mario James
1
2
3
4
5
6

Ahhh ... the good old days. When one didn't have to have the blessings of a security company to enter your home at night; when a mortgage wasn't needed to buy a car; when $500 filled your average tank. Remember? Life was uncluttered simply because one didn't have to think about doing. One just did.

Today, however, is a little different. Driving on a whim can't be done anymore. Spontaneity, the spice that flavours life, has disappeared from the condiments rack. It is hard enough to get to work every day - fuel costs hover at around $89 a litre, if one buys 87 octane, and 90 octane sells for $93 and up - so a fill-up of your average 45-litre tank costs around $4,000. A town-only commute means, if you're lucky, that the tankful lasts two weeks. Figure eight grand a month for fuel. No room for spontaneity.

What if you could roll back the hands of time - just a bit - to the days when gas was $58 a litre?

Liquefied petroleum gas (LPG) is the final gaseous fraction coming off crude during its refining process. Many countries have embraced it as an alternative fuel: It leaves less carbon footprint, has an octane number of 105; and is considered a by-product in industrial circles. So it is cheap. However, it has less energy content than petrol, and doesn't really work well with carburettors. But it burns so clean it is the fuel of choice in factories; most factory forklifts are converted to use it.

But, using the gas for general transportation was always difficult. LPG needs special cylinders, and to approach the mileage you get from gas - i.e. to be a viable, cost-effective option - it has to burn via engine management. Computers are the way to go. Carburettors are too rigid a set-up for this gas, which is why they're so inefficient using LPG. A retrofitted standalone system would be optimal, but such a kit is hugely expensive.

Zavoli Sri, an Italian company, seems to have solved the issues involved in getting LPG to the common man. What it has done is create a module that can be switched in and out of a vehicle's engine management system. Not a standalone computer, when activated it 'possesses' the car's engine management and, using a unique programme, adjusts the injection timing to suit the characteristics of LPG. Over 11 million such kits have been sold worldwide, according to the sales brochure.

The kit comprises gas lines, electricals, safety and lock-off valves and a fuel separator, which siphons off condensate, and injectors. Tanks are sold separately. No do-it-yourself kit, it can only be installed by trained personnel. Its beauty lies in its dual-mode capability; a car fitted with this system can operate natively both on unleaded fuel blends (including E10) and LPG.

The good news is that the kits are here and a distribution system has been set up locally. As of next week, conversion kits will go on sale at GM Challenger in Kingston, and will be priced at US$1,000 (J$89,000) installed (including the tank).

Challenger CEO Nigel Pagon has been researching this LPG project for the past three years. He made a presentation to the country's Energy Committee in 2007 - which was then under the supervision of Dr Carlton Davis, the then Cabinet secretary. Prime Minister Bruce Golding made mention of the project during his inaugural speech.

Golding said cutting back on Jamaica's energy bill would be made a priority in his forthcoming administration.

Installing the kit involves a thorough quality check on the vehicle and becomes a turnkey set-it-and-forget-it device. Pagon says that the initial investment should be recouped after six months, at current prices. His initial target market is commercial transport, but he is pinning hopes on cornering a segment of the private motoring sector.

Pagon recognises the volatility of the fuel and says product safety was a major concern.

"We had to train our staff to ISO 9001 standards, and this was done right here in Jamaica by Zavoli of Italy," he said.

"We go through exhaustive processes to ensure there are no leaks and that the electronics are installed to specification. For your safety, the tank, which is made of 1/4-inch thick steel, has two important features: a pressure-release valve which vents excess pressure if the tank is hit (because of a rear collision, for example), and a cut-off valve that stops fuel flow if the lines are cut, such as what would obtain in a side collision.

"The multi-valve (fuel separator) installed in the engine bay also serves as a cut-off valve. So front, side and rear impact scenarios are covered," he added.

Explaining the Challenger offer, Pagon said the kit could only be installed with vehicles that have an electronic fuel-injection system. As such, only vehicles built after the 1985 model year would be successful candidates for conversion.

"LPG needs no additives, and doesn't use a filter. Our LPG kits share nothing with the car's petrol-delivery system. Our tank is pressurised, so we don't need a pump," Pagon added.

- LPG automotive service to roll out in Jamaica

LPG is liquefied petroleum gas. It's an
hydrocarbon, including, principally, a mix of propane and butane. It is
obtained from petroleum refining process or directly extracted from the
deposit, through simple separation processes, from natural gas or
petroleum.

LPG-supplied engines run much more cleaner
becausethey do not let out waste such as lead, benzene, and sulphur,
which are absolutely absent in LPG.

One gallon of LPG has 67 per cent the energy of the equivalent amount of gasolene.

There is no ad valorem, or fuel tax, on LPG.