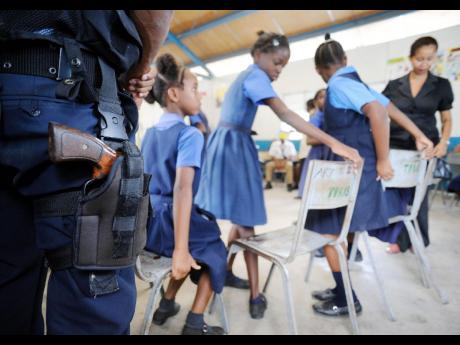 A district constable stands guard in a classroom at Tredegar Park All-Age School while a teacher does an exercise with students in order to get them to relax. - Ricardo Makyn/Staff Photographer

SPANISH TOWN, St Catherine: With one month to go before the March 25 Grade Six Achievement Test, students of Tredegar Park All-Age School in St Catherine are still too frightened to return to school after this week's bout of violence.

Only 50 of the 700 enrolled students turned out for classes on Thursday, sparking fear among educators that exam preparations - and, inevitably, results - will be severely compromised.

"This cannot be fair to the students who are studying for their examinations, if they have to be running scared from gunshots, and are also crippled with fear ... . They won't be successful on the day,'' Celomie Henry, a senior teacher at the 41-year-old institution, told
The Gleaner
.

Henry said the worsening spectre of violence which has for years affected Tredegar Park and Gravel Heights - generally low-income communities with criminal enclaves located near to the parish capital Spanish Town - has eroded school attendance, first to 400, and now the minuscule levels since a flare-up on February 23.

Tredegar Park All-Age's woes are linked to its being sited on the borderline between the communities. There have been no reported deaths so far.

The atmosphere in Tredegar Park and Gravel Heights was shattered by nightlong gunfire between rival gangs after the discovery, more than a week ago, of the severed head of a Tredegar Park man along the Thompson Pen road. Elements in Gravel Heights have been fingered as the perpetrators, hence residents of both areas have been caught in the throes of collective punishment.

Gravel Heights is just in recovery mode after gunmen triggered an exodus in December 2008, after residents were accused of being informants. The Government was forced to deploy soldiers to the area to provide protection and restore normality.

But just as things seemed to be on the improve, children have been caught dead centre in the gunfight.

"This is very bad for us, as teachers and students alike have to be lying on the classroom floor out of fear of being shot," a female teacher, who requested that her name not be published, explained. "Twenty-three students and I went through that ordeal when the shots started on Tuesday."

She said even the ramped-up armed police presence - geared at protecting the school population and giving reassurance - was unnerving the children.

"Some cower in fear when they see the officers. To some of the students, it just adds to their trauma; to the students, it's just more guns," senior guidance counsellor Egis Ffrench said.

Director of communication in the Ministry of Education, Collin Blair, said the ministry would be dispatching a trauma team to the school.

"We condemn the incident! How can people allow children to suffer like this? The problem is being dealt with and we hope the violence will cease," Blair said.