Reggae Girlz off on practice mission 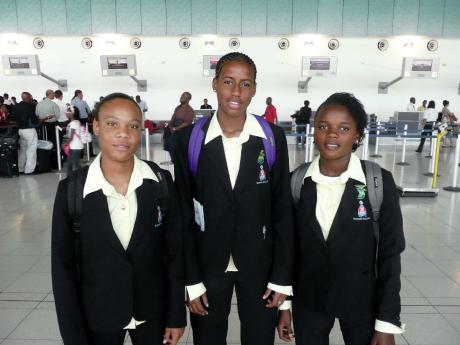 A confident Jamaica Under-17 female football contingent, led by head coach Vin Blaine, left the island yesterday for Trinidad and Tobago, where they will participate in a four-team friendly tournament against Mexico, Canada and the hosts.

The junior Reggae Girlz will be using the matches as part of their preparation for their final-round CONCACAF Under-17 World Cup qualifiers, which will be held in Costa Rica next month.

The young Jamaicans recorded impressive 3-1 and 6-0 victories over the Cayman Islands' Under-17 team in two friendly games last weekend in the Caymans.

Blaine also hopes to learn some more about their opponents.

"This gives us the opportunity to play Canada and Mexico, and these are the teams that we will be meeting in the CONCACAF round, and so we are going take a good look at them and I am hoping that these girls will gain a bit more experience from these practice games," he said.

"We are going to takes these games very seriously because we have 19 girls here and only 18 will be travelling to Costa Rica."

Blaine added: "I can't use the games against Cayman as a guide because they weren't a strong team. But this is the real test and so we are going to use this as the acid test for us going into Costa Rica."

The squad includes three members of Jamaica's Under-20 team which played in the CONCACAF Under-20 final-round World Cup qualifiers in Mexico last month. They are captain Trudy Carter, Shenice Foster and Renee Freeman.

Blaine, who is also the coach of Harbour View's female football team, noted that he will also be using the matches to see how well his girls can organise themselves against top-class opponents.

"I will also be looking at our team organisation and how quickly they can respond at this level, because we have not had a lot of training sessions and so we welcome these games," Blaine said.

"We have to make sure that we use these games to move forward with this team and, hopefully, they will get comfortable playing against Mexico and Canada, so that when we meet them again we will be ready to play them."