Prince of Peace a 'Legal' bet 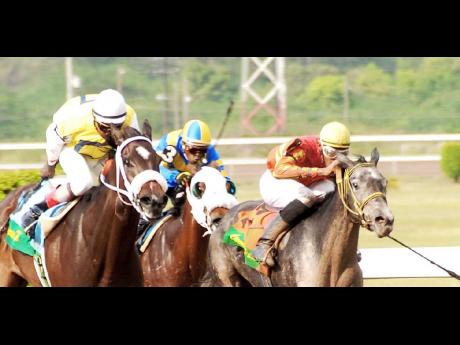 WILD TRADITION (left), running at odds of 2-1 with Shane Ellis aboard, holds on by a length from SOCA PARTY (centre) and HERA to win the Hot Line Stakes over 1200 metres, for native-bred three-year-old fillies, at Caymanas Park last Saturday.- Colin Hamilton/Freelance Photographer

The progressive four-year-old gelding, PRINCE OF PEACE, is weighted to win the $1.1 million Legal Light Trophy grade one feature over 1,820 metres at Caymanas Park today, in which six starters have been declared.

Trained by Richard Azan, who has been doing quite well with his horses since the start of the season, PRINCE OF PEACE has won three of his last four races. He lost few marks in defeat when chasing home the brilliant, unbeaten American colt CASSANOVA BOY in the valuable King's Plate over 1,500 metres, when last raced on February 6.

PRINCE OF PEACE figured prominently throughout to finish 5 1/4 lengths second to CASSANOVA BOY, who won in a new stakes record time of 1:32.1.

In finishing a clear second in a time of 1:32.1, PRINCE OF PEACE showed that he is still in very good nick. The four-year-old son of Deputy's Report - Volcanic Eruption has worked well in preparation for this race, galloping seven furlongs in 1:28.4 last Sunday morning.

Back in action with a mere 48kg and last season's most improved rider Dick Cardenas aboard, PRINCE OF PEACE will not go down easily in this small but quality field. He won easily over the distance in July of last year and even with some big names present, looks the one to beat.

All have worked well in preparation for the race, especially the Anthony 'Baba' Nunes-trained AD INFINITUM, who really caught the eye on Sunday morning when galloping 5 1/2 furlongs in 1:07.3, the last five in 1:00.4.

Despite getting on in age, the eight-year-old gelding, who failed by a short head to beat RUM TALK in the Harry Jackson Memorial Cup when apprentice-ridden last Boxing Day, is not too high in the handicaps with 57.5kg (inclusive of Aaron Chatrie's 3kg apprentice claim) to take the fight to my selection, PRINCE OF PEACE.

In a competitive-looking field, the leading lights are hat-trick seeker LATIN KING (Chatrie up), PEACE BY PEACE, NATURAL HEART, MISS ATLANTIC STAR, MISS ROSE and down in class MR. BUTCHER.

Both MR. BUTCHER and LATIN KING have beaten better in the not-too-distant past and it could come down to these two. But LATIN KING, who is coming off back-to-back wins and is now pretty light with 51kg, looks the right choice.