THRILLING GIBSON RELAYS - Holmwood's girls can take three,look out for JC among the boys 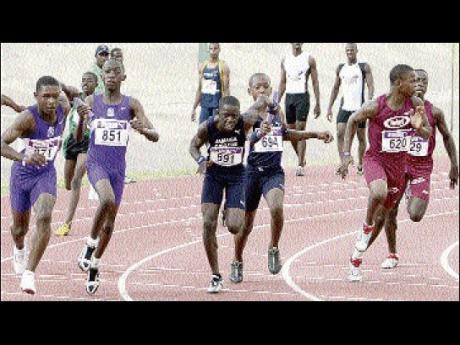 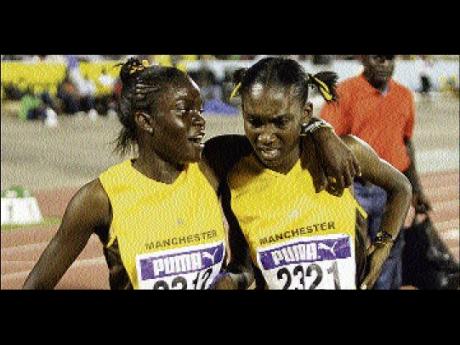 WITH the GraceKennedy/ISSA Boys' and Girls' Championships 100 just four weeks away the top high schools, except for Calabar High, will be on show this weekend as the very popular Gibson Relays, the last big meet before the championships, will take centre stage at the National Stadium, today.

Despite this being a relay meet, performances here have always given some indication as to how the Championships will unfold, and many teams use the Gibson Relays as an opportunity to fine-tune for that major meet. Despite the absence of Calabar, competition among the boys should be very exciting as the likes of Kingston College, Munro College, Wolmer's Boys, St Jago, Jamaica College and Holmwood Technical should set the Stadium track alight.

The girls should again take centre stage as Holmwood Technical, Edwin Allen High, Manchester High and Vere Technical are expected to engage in several thrilling battles. To add to the mix is the United States all-star aggregation known as Team Bickle USA, which is loaded with several of the top-ranked high school girls in North America.

The following are
The Gleaner
's top three picks for several of today's high school events.

After dominating this event for the past three years, the Michael Dyke-coached Edwin Allen High team will be hoping to continue their dominance. A fast 46.31 seconds clocking at the Western Relays makes them the leading team here. The same day, Holmwood Technical clocked 46.39 seconds to win at the Camperdown Classics and the two will, barring mishap, battle out the final. The likes of Manchester High and Herbert Morrison could upset but, overall, Holmwood are given the edge.

There is no stopping the Shericka Jackson-led Vere Technical team here as she, along with Deandra Whitehorne and company should give their team an easy victory despite the credentials of Holmwood , Herbert Morrison Technical and Edwin Allen.

After seeing their Class Four quartet decimate the record last year, and with these girls coming to this class to join several members of last year's winning team which clocked a low 46 seconds, there is no stopping Holmwood Technical here. At the Western Relays they clocked the fastest time among all classes at the meet at 46.19 seconds and, with good baton exchanges they could easily go under 46 seconds.

Last year, a Holmwood squad brought the house down with a record run of 47.49 seconds. This record will not be threatened, but the defending champions will have their hands full here as Edwin Allen have strong claims, while the likes of Queen's and St Jago High could be dark horses. Another tight one, with Edwin Allen given the edge here over the defending champions.

After a record run last year, the defending champions Vere Technical will not be stopped. They have lost only one member of that team, Jura Levy, and are expected to make it back-to-back wins here. On most occasions, the top teams do not give priority to this event. Team Bickle USA, if they compete here, could be a threat but they may not show up for this event.

This could be the most thrilling event among the girls as four teams - in defending champions Manchester High, Team Bickle USA, Holmwood Technical and Edwin Allen - are expected to have the spectators on their feet. After seeing their pride crushed last year, after coming to the meet with a lot of hype, the USA team has been reloaded this time around and, with three of their girls ranked in the top five in the United States in the 800 metres indoors, they are coming for revenge. Led by Natoya Goule last year, Manchester High were impressive in winning in a near record time of 8:49.01, and with Goule back they will be hard to deny. Edwin Allen, with the same squad that won at Penn Relays last year, has been the best team so far this season and will want to make up for last year's disappointing run at the Gibson Relays. Holmwood also have a big shot here.

A great battle is expected, but the USA team should get the better of the Jamaicans and the record set by Holmwood (8:48.96) will go here.

Another keen battle among the top four that were engaged in the 4x800 metres with Vere Technical to join them. This event will definitely bring the house down as this one is expected to be much closer. Edwin Allen will start favourites here as the USA team suffered a major setback on Wednesday when one of their top girls, Aurieyell Scott, suffered a hamstring pull at the Maryland State meet.

Holmwood, with the likes of Jeneive Russell, Samantha Woodburn and Chris Ann Gordon, are the slight favourites here and should take this one home.

With defending champions Calabar out, it will be interesting to see which team will steal the spotlight here in one of three Championship events. After winning two years in a row and finishing second to Calabar last year, St Jago are hoping to go one place better, but they have a brand new team and could find the going tough. Last year's Class Two runners-up St Elizabeth Technical, along with Camperdown, Wolmer's and St George's should fight out the finish. The Khory Spaulding-led St George's College team, who were third last year, will be hard to beat, however, as following their 41.05 seconds clocking to win at the Camperdown Classics they should go sub-41 seconds easily, and win the event.

This one should be very close as the vastly improved Munro High, with Adam Cummings in their side, are one of the favourites here. However, Jamaica College and Holmwood Technical, two of the fastest teams in the class this season, along with Manchester High, are expected to fight out the finish.

No stopping Jamaica College here. After their 44.62 seconds run to win at the Camperdown Classics, they will start as favourites to win here. However, the likes of St Jago and Wolmer's could spoil the party and it could come down to the team with the best exchanges. Another close one with the Old Hope Road-based team given the edge.

Over the years, St Jago, Jamaica College, Kingston College and Wolmer's have dominated in this Class and it should be no different today.

After scoring an upset victory last year, Jamaica College will be hoping to make it two in a row . However, this time around they will be strongly challenged by the likes of Kingston College, Vere Technical and Holmwood Technical. However, they should do enough to defend their title successfully.

Kingston College and St Jago , two of the top teams that dominated last year, could find themselves out of the top three this time around as they have lost all the members of their 2009 squads and will have to hope for a miracle to finish in the medals. This event will see three rural schools in Munro, Vere Technical and Holmwood taking on Wolmer's Boys, the expected top team from the Corporate Area.

Munro have shown all season that they will be the team to beat while the Vere Technical team could go all the way here. Another epic battle here, but Munro should get the win.

Raymond Graham, now based in the United States, still keeps a very close watch on local track and field. He coached St Jago High to several national girls' titles. He is also a former girls' coach at Camperdown High.