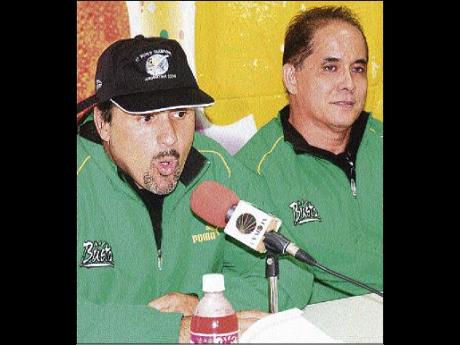 Jason McKay (left), captain, Jamaica combined martial arts team, outlines plans for the 2010 season while coach Claude Chin looks on during a press conference at the offices of the team's sponsor, Jamaica Beverages, on Monday. - Contributed

The team also laid out its 2010 itinerary and introduced new member, Scott Wright, to sponsor Jamaica Beverages in a press conference at the soft drink company's Naggo Head, Portmore, offices.

The combined team's opening assignment for 2010 will be the March 14 Tri-Asian Championship in Vietnam, where they will go up against the hosts and Poland.

However, pride of place belongs to July's ISKA Gold Cup - the first major international martial arts tournament in the Corporate Area, in decades.

World continental martial arts champions from five countries are set to descend on the NISC for the Gold Cup, a final in which top nations from the various continents meet in team-sparring action.

The finalists are New Zealand from the Pacific region, Japan from Asia and Argentina from South America, whereas Canada are North America's representatives and Jamaica complete the line-up as hosts.

Less than a week later, the team departs for the ISKA US Open in Orlando, Florida, where they will seek a fourth straight hold on the Busta World Continental Team Fighting Championship.

Jamaica Beverages and the combined team are happy with finally getting an international tournament to be held in the Corporate Area.

The local martial arts community has, for years, targeted ISKA, the world's biggest promoter of sports karate, to host a world tournament in Jamaica.

The tournament is expected to draw a full house of 5,000 and, according to combined team captain, Jason McKay, should be the template for Jamaica hosting a five-year plan.

McKay said security issues had also prevented the Corporate Area from being granted a franchise.

"That was a concern, but Jamaica hosting a number of other international events in the Corporate Area, in recent years, has made it possible," he pointed out.

"I do believe that sports tourism has a place in Kingston, as opposed to other cities I have been to. I believe we have a lot to offer and sports, on a whole, has a lot to offer," he added, pointing out that applications had been previously made to host International Taekwondo Federation events but that only the ISKA had responded favourably.