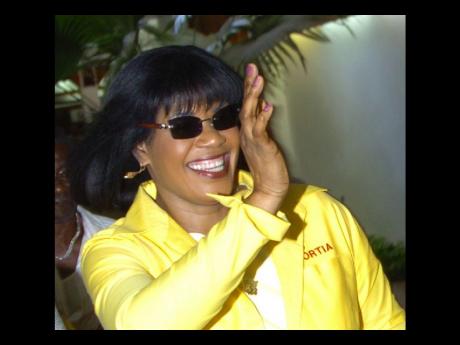 Almost uniformly, the critics say the PNP is without a clear and defined vision on the way forward, after Simpson Miller rode on a wave of unprecedented popularity to carve out a historic victory which ushered her into the PNP's top job.

The Simpson Miller-led party is regarded as being too reactive in its approach.

"What I do not find is a clear vision to take the country into a new dimension," asserted political analyst, Richard 'Dickie' Crawford.

"I would like to see a greater degree of clarity on how the party would handle the challenges being faced by the Government," declared former PNP Member of Parliament for Eastern Portland, Errol 'Jiggs' Ennis, who backed Simpson Miller for the leadership of the party.

Simpson Miller seemed content to let the milestone past unobtrusively, as she declined an invitation to speak with
The Sunday Gleaner
.

But the PNP under her leadership has not been able to escape the critical attention of those who have given many years of unwavering dedication and commitment to the party.

Not ready for state power

Despite a public show of energy and unity in the Opposition, midway into the Jamaica Labour Party's (JLP) term in office, PNP members who know what it is to limp on the ebbing tide of unpopularity and ride on the wave of overwhelming popularity are unconvinced that the party is ready to retake state power.

Paul Burke and former MP for Central Kingston, Victor Cummings, both backed Simpson Miller in 2006, and today they are warning PNP members against tripping over themselves to win the next general election, instead of carving out a well-defined, sustainable path.

"It's a minority position, but there ought not to be a primary focus on election at this time. We should be building a people's party," Burke told
The Sunday Gleaner
.

"I believe the party should instead be looking at the long term and what is in the best interest of the country," said Cummings.

Campbell said the party is doing the two things which it must do at this juncture.

"The party is repairing, reconstructing and rebuilding ground operation, as well as building and developing new policies in preparation for governance."

He said this was being done within the purview of the Progressive Agenda and the party leader's advisory group, which is focusing on governance issues as well as the structure and operation of a new PNP government.

The Progressive Agenda is the PNP's attempt to determine the parameters which would guide its action if it forms the government.

"I don't believe enough is being done to unite the party. If we don't unite the party, we can't win an election," argued Len Blake, the former MP for South East St Elizabeth.

Many Comrades believe that Blake was sidelined in 2007 because he backed Simpson Miller's strongest rival, Phillips, in the 2006 contest.

"I am in South East (St Elizabeth) and I don't see any great effort being made to build back the party to what it once was ? the party is still too fragmented," Blake lamented.

He conceded that there was a show of unity at the senior levels of the party.

"But that is not enough. We need to transfer what we see at the top to the ground ... a lot of work needs to be done to forge unity on the ground by bringing the people together," argued Blake.

Crawford said he remains unimpressed by the absence of a clear vision by the PNP.

"It (the Opposition's agenda) is being determined by the action of the Government, whether bad or good, as well as the role of a traditional Opposition in our political system," asserted Crawford.

"The Opposition is not impressive, in that it is not providing a clear alternative to the present Government," Crawford told
The Sunday Gleaner
.

"What I see is glimpses of the PNP trying to come to grips with its own internal differences, which is to re-establish its philosophy, leadership capacity and to develop a new policy framework."

Crawford referred to the current activities of the PNP's Youth Organisation as a bright spark attempting to reignite the fire in the party.

"I say this against the backdrop of the appraisal (to determine why the PNP lost the 2007 general election) that had determined that if the party was to be effective, youth organisation had to come alive and seize the moment instead of staying within the paradigm of the old politics."

Ennis, who stepped away from representational politics in 2007, warned that the PNP should not rely on the failures of the Bruce Golding administration to secure electoral popularity.

"I wouldn't say I am satisfied, but I see indications that they (the leaders of the PNP) are dealing with issues in a responsible manner," said Ennis.

He, however, called for greater clarity from the PNP on its plans for governance.

Ennis stressed that he was well aware that the competitive nature of politics is subject to challenges and debate.

"The country is in a ticklish spot and we in Opposition need to confront what is happening and come up with more than that (reactions to Government mistakes)."

He contended that while there may be some misgivings about the state of governance, instead of just criticising the Government, the PNP needs to craft a clear vision for itself.

"The Government has not been equipping itself with distinction, but I am not willing to condemn them yet ? . We have to give the Government some time before you can successfully challenge them," Ennis said.

The forthright Burke - well known for his defiant and unapologetic support of Simpson Miller in the past - suggested that instead of placing its emphasis on (winning) elections, the PNP's prime focus should be to return to the role of a 'people's party'.

He argued that the PNP is becoming a stronger party than it has been in a long time, but declared that it is still nowhere near to being a 'people's party'.

"The PNP needs to enter into a programme of national cooperation with the people of Jamaica and the Government, in that order," said Burke.

"Not because we didn't get the support of the JLP in Opposition means that we shouldn't support programmes in the national interest."

He cited crime and food security as two of the critical issues which must command the attention of the Opposition.

"By all means, criticise the Government for its mistakes, but we must go the extra mile for programmes in the national interest," Burke declared.

Cummings, another Simpson Miller backer, who reluctantly walked away from representational politics after he was replaced by Ronald Thwaites in 2007, agrees with Burke.

"I don't think enough is being done," declared Cummings. "We need to start looking long term ? what is in the best interest of the country. As such, we need to communicate with the people."

Citing the constitutional and local government reform programmes as good places to start, Cummings said the PNP should begin preparing policy papers on these issues.

"We need to move away from reactionary politics and focus on the long-term view of the country ? . It is time we take the high moral ground, and that's the position we should be pursuing."