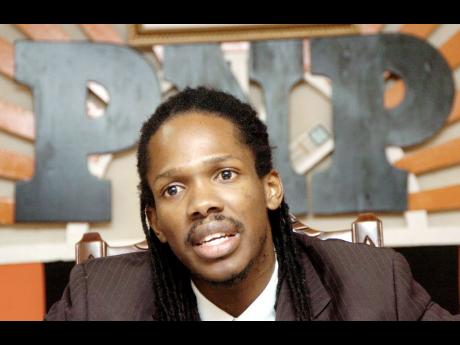 President of the People's National Party Youth Organisation (PNPYO), Damion Crawford, yesterday signalled that the festering wound in the party is yet to heal when he launched a stinging broadside on General Secretary Peter Bunting.

In an email sent to more than 50 members of the PNP, including President Portia Simpson Miller and Chairman Robert Pickersgill, Crawford characterised Bunting as a coward and accused him of trying to derail the youth organisation.

"I am of the view that this yellow-belly attempt to derail the activities of the PNPYO while I am away is the plot by none other than Peter Bunting, of whom the cowardly act reflects greatly," charged Crawford.

But Bunting yesterday shied away from a public quarrel with the young comrade. "I wouldn't dignify this with a response," Bunting told
The Sunday Gleaner
.

Bunting, who has led the PNP secretariat since 2008, has had his fair share of detractors, but none has gone public with such biting criticisms as contained in Crawford's email.

"Instead of Mr Bunting trying not to continue in the current vein as the worst general secretary in the history of the organisation and the most likely variable for a negative result at the next polls, he has insisted to plant his influence in the PNPYO," charged Crawford.

"Indeed, he continues to speak negatively about the PNPYO, and in particular myself as the president, at almost every function he attends, both inside and outside of the party," Crawford complained.

"He, however, doesn't speak to the level of ineptitude he has brought to the position of spokesperson on security, which the majority of us only continue to whisper about."

Crawford complained that the party has failed to do anything about the deteriorating situation and said he was prepared to resign as the president of the youth organisation.

"I will be in Australia until the 23rd of March and am prepared to tender my resignation if so required the first Monday after that date - until then, I will remain the president of the PNPYO and will reply publicly to every email or correspondence sent by Mr Bunting through Lieghton Morrison that refers to me in a negative light, calls my job into question or speak negatively of my character," Crawford said.

According to Crawford, since he was voted president of the PNPYO, he has invested a lot of effort and money in taking the organisation to a position that will improve the standings in the youth demographic. "I have done these activities with the best of intentions to move the country and the party forward," Crawford said.

"Notwithstanding, there has been a constant campaign by Bunting and his crownies (
sic
) to suggest that I am trying to have personal gain, and that is central to my activities in the PNPYO," Crawford complained.

He said he had previously declined to comment publicly on the issue since he was "indirectly accused of attempting to garner personal gains at last month's National Executive Council meeting, by persons in the PNP hierarchy".

The PNPYO president claimed he has been under pressure since criticising the party after it was not ready to participate in a parliamentary debate on the economy last month.