Art as an environmental tool 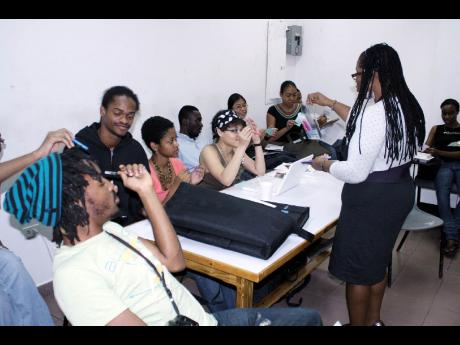 Students of the CAN Club (Edna Manley College's Environmental Club) complete an exercise during a workshop facilitated by Open University's Project Manager Janice Ansine (forefront) on the college's campus. 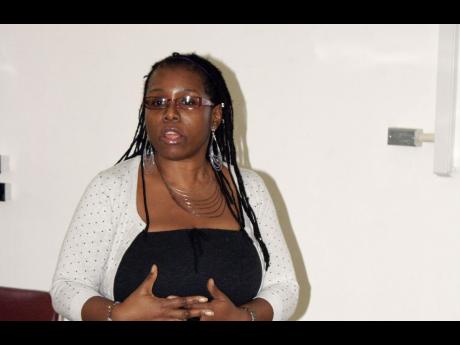 THIS YEAR has been declared the International Year of Biodiversity, and Biodiversity Observatory Project Manager at the Open University, UK, Janice Ansine, brought this environmental issue to the forefront recently, with a twist of Jamaican flavour.

Ansine, who has previously worked in environmental communications in Jamaica, spearheaded this initiative in collaboration with Edna Manley College of the Visual and Performing Arts (EMC), other local and British institutions.

In February, Miss Ansine conducted interpretative workshops with students from the Edna Manley College's environmental club, more popularly known as the CAN (Culture, Architecture and Nature).

"The project is aimed at building awareness of Jamaican biodiversity and the role it has played in global understanding of the natural world.

"Through the eyes of this group of young and upcoming creative artists, we are exploring how local understanding of biodiversity impacts on Jamaican arts and culture as a medium of expression and interpretation, at the same time facilitating deeper understanding of the importance of biodiversity - the variety of plants, animals and all living things," Ansine said.

The first stage of the project - 'The biodiversity experience - Jamaican style' - included two interpretative workshops where students' impressions and views were captured in a 'video diary' format.

"We are really excited to have the project here at the Edna Manley College, as this gives us an opportunity to show people that the arts can be used for more than the traditional self-expression but to also assist in environmental and societal issues," said president of the CAN Club Samantha Hay.

The next stage of the project will see the students working to produce pieces of interpretative work, choosing a mode of expression to reflect their own artistic skills, expressing their perspectives about biodiversity and its importance to the island. This will be showcased to the general Jamaican public at an exhibition to be held before the end of June.

Jamaica is highly regarded for its wide range of species and ecosystems. It has been identified as the island with the highest number of endemic (native) birds and plants in the Caribbean. Jamaica also ranks fifth among the world's islands for endemic plants.

"Our biodiversity has contributed to many studies and work of scientists all over the world. In the 1800s, Darwin himself actually had naturalist colleagues in Jamaica do field experiments for him, and the assistance he received from figures, like one of Jamaica's first naturalists, Richard Hill, had some influence on his work," Ansine said.

She added, "Iconic species such as the Giant Swallowtail Butterfly, the Hawksbill Turtle and the flowering Cacti Mamillaria are endemic species making up Jamaica's biodiversity, but like many others discovered and studied over hundreds of years, they are too easily disappearing from the island's landscape."