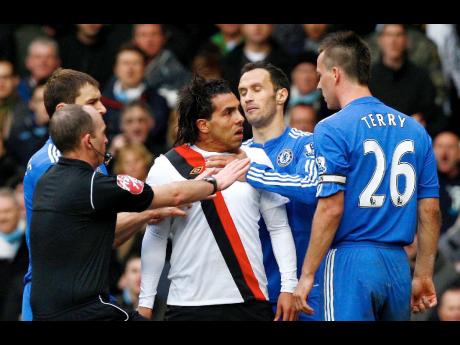 Julian Belletti and Michael Ballack both saw red as Chelsea missed a chance to extend their one-point lead over defending champion Manchester United with 10 matches to go.

After Frank Lampard fired Chelsea ahead, Carlos Tevez and Craig Bellamy each scored twice for City. Lampard scored another in the 90th minute from the penalty spot, but it couldn't prevent Chelsea losing for the first time in all competitions at Stamford Bridge since going down to Arsenal in November 2008.

Third-place Arsenal closed the gap on Chelsea to three points by rallying to beat 10-man Stoke 3-1 in yesterday's late match. But Aaron Ramsey is set to be out for the long term after a tackle from Ryan Shawcross resulted in the Stoke defender's dismissal and left the Arsenal midfielder possibly facing surgery.

City are nine points adrift in fourth with a game in hand after completing their first league double over Chelsea since 1957 to relieve the pressure on manager Roberto Mancini.

Also yesterday, bottom-place Portsmouth beat Burnley 2-1 one day after being the first Premier League club to be forced to seek bankruptcy protection. Bolton climbed out of the relegation zone with a 1-0 victory over Wolverhampton and Birmingham kept their European hopes alive by beating Wigan by the same score.

All the intrigue yesterday was focused on the clash of the league's two wealthiest clubs - Chelsea and Man City - and the ill-feeling between Wayne Bridge and Chelsea captain John Terry.

They came face to face for the first time since allegations surfaced about an affair between Terry and the mother of his former Chelsea teammate's son. In the pre-match fair-play formalities, Bridge refused to shake hands with Terry, who was stripped of the England captaincy as a result of his affair with Vanessa Perroncel.

For Bridge, ensuring City finish in the top four and qualify for the Champions League became the priority after the left back announced his international retirement on Thursday, saying his position in the England team was "untenable".

City have a three-point lead over Tottenham and are an extra point ahead of Liverpool, with the trio having all played 27 matches.

But City had to recover after conceding three minutes before half-time when Lampard ran on to Joe Cole's pass and slotted past Shay Given.

Tevez ensured City was level at the break, by turning Terry then scuffing a shot that managed to beat goalkeeper Henrique Hilario and clinch City's first goal at Chelsea since 2000.