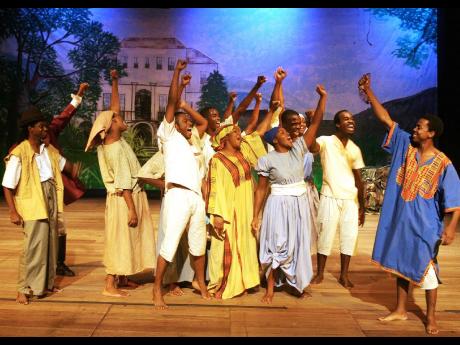 Having been twinned with The Radiator Factory from Denmark, the Jamaica Youth Theatre (JYT) is set to learn quite a bit leading up to the Contacting The World festival in July.

In January, Jamaica was selected as one of 12 youth theatre groups from around the world that will be part of Contacting The World, to be held in Manchester, England, in July.

In starting the process, the JYT submitted a video profile and a piece filmed about the Jamaica AIDS Support. The group was selected from approximately 100 other theatre groups. After that, JYT was randomly twinned with Denmark, forming what they now call 'Fire and Ice'.

Since then, Denmark and Jamaica have been involved in active exchanges. Each month, they do activities using aspects of the other's culture in their presentation. They record the pieces and post them on the festival's website (
www.contactingtheworld.org
).

"The aim is to foster creative expression throughout the world for us to appreciate the culture of other people and to grow as performers. In collaborating with them, we will learn different things," JYT president, Randy McLaren, told
The Gleaner
.

"The challenge is to learn some of those techniques and incorporate them in our pieces and learn that there are other art expressions outside of what we are accustomed to. It's going to be challenging, but we have been learning and we have been working on it."

JYT coordinator, Aston Cooke further said, "The aim is for each country to create a theatre piece using influences from the other country mixed with yours. It's not a competition, but a festival and exchange of culture."

McLaren said the JYT would be bringing its unique style of dub poetry to the festival. This will be coupled with the wide range of street cultures from The Radiator Factory. They use graffiti, parkour, street dance, street music, rap, digital words, film and video in their search for artistic expressions.

Contacting The World is a pioneering, biennial festival and collaborative project for young people across the globe. The festival inspires innovation, creativity, inter-cultural dialogue and genuine collaboration among hundreds of young people. It is a programme of exchange involving 150 young theatre-makers from 12 different companies across the world, who are randomly twinned to work creatively and collaboratively over a six-month period, culminating in a vibrant festival.

Throughout the months leading up to the festival in July, both groups will be maintaining contact with each other, learning and teaching different techniques. They also communicate via the community website. And to further the teaching, in a few months, a representative from Jamaica will go to Denmark and one of their representatives will come here. In addition, one of the artistic facilitators will visit the island in March to participate in workshops and meetings.

"I think that when the festival is done and over, the members will have a totally different outlook on theatre while having fun," McLaren said.

With their accomplishment thus far, McLaren said the members are very pleased.

"Mi feel good. It's a major, major achievement. How many groups can boast of being part of such a major festival? I think the exposure will do so much for us. When we come back to Jamaica, I can see the group exploding. All the members are very happy. We enjoy doing what we do and we can only learn and develop from this," he said.

Cooke is also very proud of the group.

"JYT has a strong legacy. I'm excited to be part of the group. I am humbled by their participation in this big festival," he said.

The festival is funded by the Arts Council of England. But locally, Cooke said, the group is still hoping to receive some financial assistance.