Accident claims pile up against JUTC 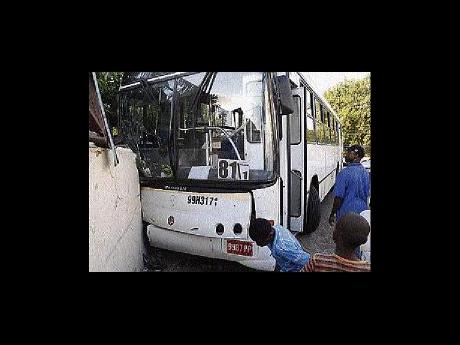 This JUTC bus ran into a wall on North Street in Kingston on February 22. Several passengers were taken to hospital by the police with minor injuries. This is one of the many which have crashed recently.- File

HAVING SPENT more than $54 million over the past three years to settle accident claims, the state-owned Jamaica Urban Transit Company (JUTC) is still facing a massive pile up of similar claims which could further retard its operations.

The struggling bus company has projected an operating loss of $1.3 billion this year, and commuters will soon be asked to pay more for bus fares to reduce the financial burden that the JUTC places on the public purse.

That financial bind facing the JUTC is not being helped by the mounting accident claims.

Paul Abrahams, managing director of the JUTC, told
The Gleaner
that the bus company is now in possession of 476 claims for which persons are seeking a combined $136.8 million to settle damages as a result of JUTC bus crashes.

Besides those claims, several persons injured in accidents involving JUTC buses have not sought damages.

Abrahams told
The Gleaner
that 1,578 recorded accidents involving the JUTC have so far not attracted claimants.

The payments made in the last three years have been minor compared with funds projected by the JUTC for payment to third parties.

In explaining the difference between the amount paid out and the projections, Abrahams said many of the cases of accidents have not attracted claims for settlements.

Transport Minister Mike Henry told the House of Representatives last week that between May 2005 and August 2007, 2,393 claims were submitted to the insurance carrier of the JUTC - Advantage General Insurance Company - for settlement.

He said 545 of those claims were settled and the remainder returned.

Robert Pickersgill, the Opposition spokesman on transport, charged in Parliament that the JUTC was in such bad state that it is unable to pay damages to persons despite court orders.

"This situation cannot be allowed to continue. I know of lawyers who are trying to seize JUTC's property ... trying to seize the buses because they go to court and the court rule in their favour and they can't collect," Pickersgill said.

However, Abrahams has dismissed the assertion from Pickersgill. "That is not true. We have no problems when it comes to settling our claims, absolutely none," Abrahams said.

"Every claim that we have right now is being honoured, being settled, being paid out as best as we can. There is nobody hounding us down and coming to seize our buses. There is no lawyer writing any nasty letters to us about they are going to seize this and seize that," the managing director added.