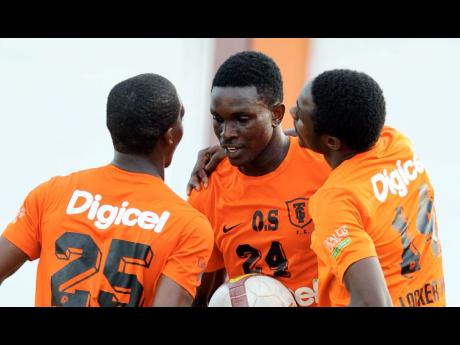 Despite being second best for large parts of the opening half, Boys' Town found themselves in the lead after Anthony Bennett scored from close range with only eight minutes on the clock.

In truth, Bennett's goal was as a result of some comical defending on the part of Tivoli defender Kemar Flemmings, who allowed a simple pass to roll under his feet inside the penalty area and straight into the path of Bennett, who made no mistake, placing his shot beyond Edsel Scott in the Tivoli Gardens goal.

The host continued to press after suffering the early setback but were repeatedly unsuccessful in their attempts on the Boys' Town goal.

The pressure did eventually pay off as Boys' Town finally cracked on the stroke of half-time when Dean found himself with only goalkeeper Philmore Crumbie standing before himself and the goal. The talisman kept his nerve to calmly place his shot and level the scoreline before the partisan spectators.

The host started the second half like a team possessed and it didn't take long for the defending champions to claim the advantage.

Morgan found himself in the right place at the right time to bluff an effort from Dean off the goalline, but he could do nothing about Daley's tap in for a 2-1 lead from a goalmouth melee from the ensuing corner on 54 minutes.

The busy-bodied Dean returned for his second after 70 minutes, firing into the far corner from the top of the penalty area, before Daley drove the final nail in the Boys' Town coffin with another close-range strike four minutes later.

"We really wanted to start as well as we started the second half but we are happy with the win," said Max Straw, the assistant coach of Tivoli Gardens. "A 4-1 win is a good win, no matter how it comes."

"We played an awful second half and we got beaten by a good team. We simply weren't tracking and when you have people like Roland Dean and Keammar Daley, who are good quality players, you have to track them," said Price. "We played a team that is challenging for the title and they obviously showed it. we are basically going through the motions right now and we need to step up."