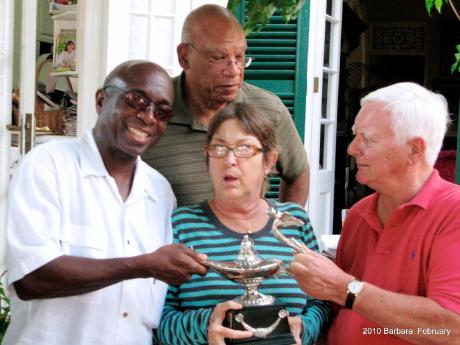 To commemorate the 40th anniversary of the death of Stephen Potter, the annual tennis tournament, named after this great man, was played at the Liguanea Club on Sunday.

Controversially, the keenly contested event was won by the organiser, Tony Gambrill, who last year awarded himself a Lifetime Achievement Award in his own tournament. His playing partner was Norman Marshall.

Second-placing pair was Rachel McLarty and Everton Morgan, whose game score exactly equalled that of the winners.

Gambrill and Marshall stunned the crowd at the well-attended prize presentation ceremony, by introducing a new rule that converted a tie in game numbers into a victory for the organiser and his partner, who had won the 'head-to-head' match.

Everton Morgan left prior to the award ceremony, but after presenting the winning cup to his own partner in a private ceremony.

In spite of the introduction of the new rule so late in the game, all players accepted the generous offer of the organiser to in future host the Stephen Potter tournament on a six-month basis.

Hall of Fame certificates were given to Professor Marshall Hall and Oliver Clarke.