'It was a fantastic display' 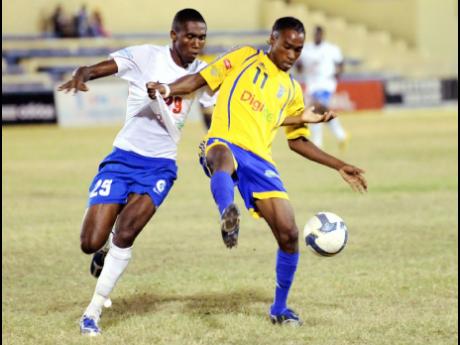 The 'Stars of the East', who lead the points table with 57 points - three more than Tivoli Gardens - with 10 rounds remaining, were at their adamant best in tagging Portmore 2-0 at the Harbour View Mini Stadium in a late-night fixture.

After an exciting first half where both teams created chances - most of which went in the home team's favour - Harbour View took the lead in the 51st minute through Kavin Bryan.

In minute 80 they made sure of the points via substitute striker Andre Fagan.

"It was a fantastic display of good football," said a delighted Hayles.

"One, we didn't just play one half of good football but two, as throughout the second half we constantly moved the ball beautifully. Our finishing today was also impeccable," he said.

Bryan's goal was a powerhouse volley from inside the area. Lurking atop the 18-yard box, he was the recipient of a parried save from goalkeeper Dwayne Kerr and with the ball bouncing nicely, he rocketed a shot into the roof of the net.

Fagan, in the meantime, was an example of determination as after being rather clumsily shielded from the ball for about seven metres from goal by defender Andre Darby, he kept in pursuit and with goalkeeper Duwayne Kerr failing to leave his line quickly, he tucked in between the two before winning possession and slotting home.

Said Bell: "Congrats to Harbour View. Unlike other games when we lose we played better than the opposition, today they were better than us. They outplayed us.

"But I still think this is a quality team with quality players. We just have to continue working hard, build our confidence and hope that in our last 10 matches we will get it right," Bell continued.

Portmore substitute, midfielder Shauntel Mundel, was sent off in the 89th minute due to violent challenge.