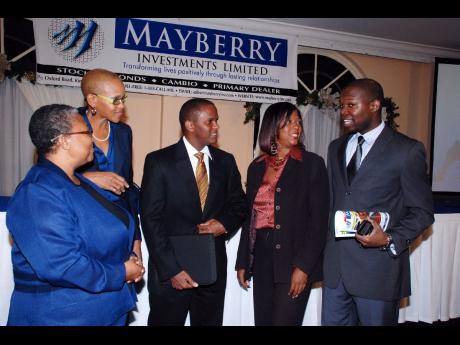 Just months after going public and listing on the Jamaica Stock Exchange, Access Financial Services Limited, a relatively small loans and cambio business, is about to ask holders of its more than 27 million shares to give the go-ahead for a stock split to stimulate market demand for the stock.

Chief executive officer Marcus James said the proposal for the 10 to 1 split will be put to a vote at the company's first annual general meeting - scheduled for April 21 - since it went public four months ago in October 2009.

The stock, which was issued at $18.34 per share, currently trades above $29. It remains the only stock currently listed on the nascent JSE Junior Market.

"While the stock split will reduce the price per share the primary motivation for the split is to create additional liquidity in the stock, and we believe that a 10-for-one split will achieve this," James told
Wednesday Business
.

Stock splits are usually done by companies which have seen their share price increase to a level considered too high or beyond the price level of similar companies in their sector. The split is executed so as not to dilute the value of shareholdings or the firm's stock market value, but the technique is meant to position the stock to eventually gain in value by making it more affordable to investors in the market to buy shares.

Since listing, Access' stock has seen very little trading, changing hands only 18 times over the last five months with the highest volume traded being 26,300 in early December.

At the time of the IPO, some analysts had contended that the offer was overpriced - a position James rejects.

"While there were some analysts who believed that the stock was overpriced at the time of the IPO, there were many who recognised that Access has maintained solid earnings growth over the years, and also evaluated the positive impact of the income tax remission on the company's multiples," said James.

As an incentive for listing on the junior market companies are given up to ten years' tax break from the date of listing.

"It is a positive for the stock and for persons who want to sell know that there are buyers for it," said financial analyst and stock market expert, John Jackson, approving the split.

"The stock has not been as liquid as one would like. At $28 per share it is not high, but many persons who applied seem to have held on to the shares, therefore, this will provide some amount of liquidity."

The size of the split, however, is a little puzzling, Jackson said.

The firm's main business is retail lending to the micro enterprise sector for personal and business purposes. Its loan portfolio in 2009 rose to $453.8 million, accounting for the majority of balance sheet assets which closed the year at $608.5 million.

Since its listing, the company has announced the opening of three new branches in Portmore, Linstead and Santa Cruz.

"During the 2010 financial year, we plan to continue the expansion of our branch network in areas where our research shows a demand for our products and services," James said.