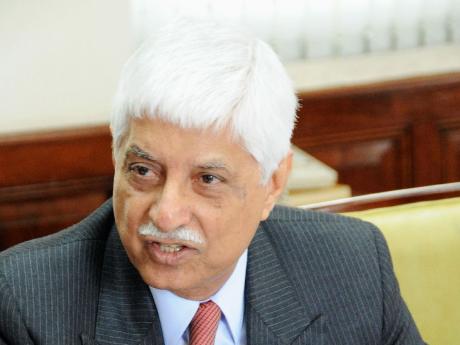 Zia Mian, Director General of the Office of Utilities Regulation, wants to impose fees of more than half a billion dollars on telecoms firms. - File

Telecoms regulator, the Office of Utilities Regulation (OUR), has circulated a draft three-year corporate plan that is drawing flak from two of Jamaica's top players in the industry.

The OUR is proposing in its 2010-2013 plan to raise the level of regulatory fees companies under its watch now pay, to fund a proposed 33 per cent OUR budget hike, eliciting strong objection from Digicel Jamaica, the number one mobile provider.

The budget enhancement would see the OUR needing to raise $517.59 million

a year in cash from the industry, compared to the $387.94 million they currently pay.

Digicel, the Irish-owned provider, is insistent that the OUR should tighten its belt and forego the need to increase its budget by reassessing its approach to

policing the telecoms industry and focusing instead, Digicel said, on what that phone company regards as the priorities.

The company did not say what these priorities should be.

"We question the basis for an increase in the budget at all for 2010/2011, given the current financial environment," Richard Fraser, Digicel's head of legal and regulatory affairs told
Wednesday Business
.

"Digicel is concerned about the indications that the cap of 0.3 per cent of the revenues in respect of payments towards regulatory fees might be lifted," the official said, zeroing in on the implications for his company to fork out more in regulatory fee payment.

A fee increase in the current financial situation, Fraser is contending, would have a direct negative impact on telecoms businesses in Jamaica.

In the meantime, landline, internet and mobile provider, LIME Jamaica, is more concerned about what it said is the regulator's preoccupation with policing its operations, accusing the OUR of being

'heavily slanted' in its regulatory activities towards the one time monopoly, rather than being focused on the general industry.

"The OUR's preoccupation with the need to regulate LIME as the incumbent telecommunications service provider is inappropriate, given the current market conditions," Geoff Houston, the LIME boss for Jamaica and the Cayman Islands said, via email.

LIME, Houston said, wants the OUR to insist on equal rates for calls terminating on the various company networks, and suggests that these should be based on real costs.

He is also suggesting that the regulator forbids what he described as 'anti-competitive fixed line to mobile rates' being applied by any provider to competing fixed networks.

Regulations requiring mobile tower sharing on a 'one-to-one' basis, and which compel that all phone carriers make their networks

available for indirect access service allowing the public to use calling cards to make both local and overseas calls, the LIME Jamaica boss added, are among the matters the OUR needs to take on board.

"LIME is convinced that the implementation of these market remedies will make local telecommunications markets more competitive, creating a level playing field so that all operators will have an equal opportunity to compete for market share,"

Among the plans outlined in the regulatory body's 58-page draft, is a commitment to explore the potential of implementing telephone number portability, a feature which the former monopoly provider, and lately, Claro has been advocating, but for which Digicel has not shown any support.

The OUR appears supportive of the move. While pointing out that Jamaica has seen a remarkable rise in the availability and use of telephone services since the liberalisation of the sector some ten years ago, the OUR document notes that, "There is a concern however, that a significant factor in that impressive statistic is the fact of multiple handset ownership."

"This is a feature of markets without number portability and significant variation in termination charges, as is the case with Jamaica."

The Zia Mian-headed OUR is now undertaking a cost-benefit analysis of number portability. The study is due to be completed by June this year.

Other issues which the regulator has placed on its agenda include the implementation of secondary alternative emergency numbers, establishing a system for managing and allocating toll free numbers, and ensuring that all telephone service licence holders are complying with information requirements and paying their regulatory fees.

It is also advocating a contingency provision in licences, for consultation to take place in the setting of mobile termination charges.

But, at least one phone company is balking at the raft of items on the regulatory body's agenda, suggesting limits to the role of the regulator.

"We believe that the role of the OUR should remain limited to pre-contractual disputes, as prescribed in the Telecommunications Act, and that it should not interfere in existing contractual relationships between the operators," said Digicel's Richard Fraser.

His company wants more focus to be given by the OUR to establishing mechanisms for the speedy settlement of disputes in the sector.

"We believe that the majority of pre-contractual disputes could be avoided, or could have been resolved much more rapidly if the correct systems had been put in place. Failure to implement such measures has the potential of acting as a significant drag on the sector."

On this point the rivals agree, with LIME officials noting their dissatisfaction with what they say is the delay in the adjudication of an appeal by them of the OUR's decision on mobile termination rates by competitor, Digicel.

It is proposing that the Telecommunications Appeals Tribunal, which hears such appeals, be adequately resourced to do its job.

Digicel's criticisms of the OUR goes even to the issue of the regulator having separate mission statements for the various industries it regulates.

It is proposing too, that the regulator's policy and enforcement and compliance activities for telecommunications be isolated from work relating to other industries.