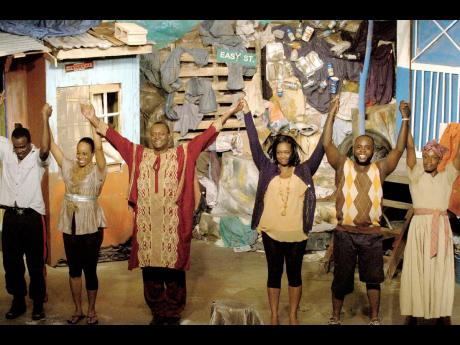 From those, 19 productions have earned nominations in the 19 categories of the 20th Actor Boy Awards. The announcements were made at the Spanish Court Hotel, New Kingston, very close to where the actual awards ceremony will be held - the Courtleigh Auditorium, New Kingston - on Monday, March 29.

And if the enthusiasm of the audience at the announcements is anything to go by, the awards should be a rollicking affair.

Pirate Jack
has garnered six nominations ,
Two Can Play
five, with
Dreamgirls
,
Beauty and the Beast
and
The Love List
picking up four each.

For Better or Worse
has two contenders for Best Actress in a Supporting Role, Ruth Ho Shing and Terri Salmon. Maliaka Bryce (
4 Play
), Coleen Lewis (
A So it Goh
) and Sharee McDonald Russell (
Easy Street
) round out the field. In the male equivalent are Craig McNally (
Voices
), Glen Campbell (
Diana
), Elijah Gayle (
Beauty and the Beast
), Rodney Campbell (
4 Play
) and Lawrence Woodham (
Family Affair
).

And in the New Play category, Prout has another nomination with
Mo'Bay Vibes
, Basil Dawkins is in with
For Better or Worse
and Patrick Brown for
Easy Street
.

One category is already settled, as the Jamaica Junior Theatre Company's
Beauty and the Beast
is the only Children's Theatre nominee.

Scarlett Beharie announced that this year's Actor Boy Awards' honouree is Jean Small, who has worked as a playwright, poet, actress, director, storyteller, puppeteer and educator for more than 50 years.

Hosted by Cunningham and Craig McNally, the launch showed a glimpse of what is to come at the awards ceremony, which is liberally laced with performances. Among them were Lee Patience doing an excerpt from
Voices
, and Aisha Davis and Maurice Bryan delivering a song from
Dreamgirls
.

Sydney Bartley from the Ministry of Culture, Youth and Sports remarked that the theatre community must recall those who have passed on, including Trevor Rhone and Professor Rex Nettleford. And he noted new developments, saying, "I see some names in 'Chu Chu', I see some people in
Serious Business
and
Passa Passa
and it is very interesting".

"We should be bold enough in creating new categories in the theatre arts," Bartley said, in indicating a possible path forward.