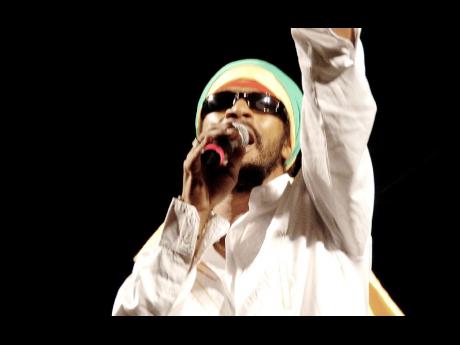 After what he considered a very good year in 2009, prolific singer/songwriter/producer Lymie Murray could not have asked for a better start to 2010 than being given the opportunity to perform at the prestigious Jamaica Jazz and Blues Festival, albeit on the small stage.

"This was indeed a beautiful way to start the New Year, I really don't think it could have been better," said Murray, who threw everything into the performance and had the patrons rocking and grooving to his music in appreciation.

"This is the type of opportunity that most artistes are yearning for, so when I got the opportunity I just jumped at it," added Murray. "In terms of small stage ? as far as I am concerned, there is no small stage whether it is at the Jamaica Jazz and Blues Festival or at any other venue. Once you take the microphone into your hands, it becomes a big stage."

Having created a fairly good impression at the jazz and blues festival, Murray is hoping that those who got a chance to listen to and savour his performance would become new fans, if they were not before.

"I saw this as an opportunity to open up to the world because it was an international audience," noted the singer. "I hope that those who heard me left the venue with Lymie on their mind."

Satisfied that the jazz and blues festival was a good launching pad for 2010, Murray is now looking forward to taking the world by storm as he seeks to build on what he achieved last year, including a super performance at the Sebastiani Theatre in California, which won him rave reviews.

"Last year was a very good year for me ? I spend a lot of time on the road and I was also quite busy in the studio doing a lot of production work," said Murray, who currently writes for and produces several artistes.

"We also dropped several singles during the year," added the singer. "It was a year in which we did a lot of work and we are now looking to start reaping the fruits."

With his catchy new single,
Good Morning Jamaica
, gaining much traction on the local airwaves, the singer plans to devote a great deal of time promoting that single, as well as other works, as he seeks to generate maximum publicity.

"We will be hitting the road soon ? we will be heading to California to complete the upcoming album
Deeper Roots
, which is already released as an EP," said Murray. "We are now looking at the official release of the entire project.

"We are also looking at our regular trek across the eastern Caribbean ? Dominica coming up in April," added the singer. "We are also gearing up to claim Reggae Sumfest this year and looking at Western Consciousness. In fact, we will be looking at anything that is juicy and happening."

Satisfied that his career is now on a path of growth, Murray is giving full credit to his management team and the other persons who have been supporting his efforts.

"I must give credit to the tremendous team of people I am now working with," stated the singer. "Without them, I don't think things would be looking as bright for me as they are now."