'We reject US claims' 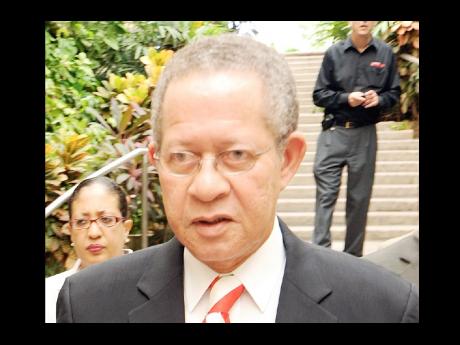 THE GOVERNMENT has taken note of the United States Narcotics Control Strategy Report of March 2010. The report, while acknowledging that cooperation between Jamaican and US law-enforcement agencies remains strong, reflects negatively on the effectiveness of our efforts to combat organised crime, drug trafficking and corruption, as well as the delays in enacting legislation to strengthen these efforts.

The report is being carefully examined and a detailed statement will be made in the Senate by the minister of national security on Friday.

The report includes prominent references to the Government's treatment of extradition requests and, in particular, to the request for the extradition of Christopher Coke, and it is to these issues that I wish to speak today. The Government has refrained from making any detailed public statement in relation to this matter because of the provisions of the Extradition Treaty between Jamaica and the US relating to confidentiality, a position reaffirmed in the several meetings between both sides on this particular matter. However, in view of the statements contained in the Narcotics Control Strategy Report, I am obliged to make this statement this afternoon, and the US authorities have been so advised.

The request for the extradition of Coke was received on August 25, 2009. There were aspects of the case and the procedures employed that were abnormal and the Government, consistent with the provisions of the Extradition Treaty, sought clarifica-tion and additional information. In most instances, however, these peculiarities would not, by them-selves, prevent the request from being proceeded with.

In one important respect, however, it was found to be in violation of the law. The Interception of Communi-cations Act makes strict provisions for the manner in which intercepted communications may be obtained and disclosed. The evidence supporting the extradition request in this particular case violated those provisions. So serious an offence is this violation that the penalty provided by law is a maximum fine of five million dollars, or to imprisonment for a term not exceeding five years, or to both such fine and imprisonment.

The law further requires that for intercepted communication to be admissible in any criminal proceedings it must have been obtained, disclosed and used in accordance with these provisions. This was not done in this case. This was highly irregular.

The Jamaican Govern-ment, rather than summarily refusing the request, dis-cussed with the US authorities the breaches that had occurred, which made it impos-sible for the minis-ter, being aware of such breaches, to issue the authority to proceed. These discus-sions involved several meetings both here and in Washington, DC. At a meeting in Washington in December, where the legal position was fully outlined by the Jamaican authorities, the US authorities undertook to consider the issues and requested time to do so. Their response, received only yesterday, has not altered its position. Ever since the receipt of this extradition request, the Jamaican Government has remained constantly engaged with the US authorities on the matter.

In an effort to overcome the impediment cited above, the Jamaican Government indicated to the US autho-rities that if other evidence existed, the procurement and disclosure of which were not in violation of Jamaican law, the minister would be prepared to accept that evidence and issue the necessary authorityto proceed. No such evidence has up to now been presented.

The US Narcotics Control Strategy Report accuses the Govern-ment of "unfounded allegations ques-tioning US com-pliance with the Mutual Legal Assis-tance Treaty and Jamaican law", and has questioned the Government's commitment to law-enforcement cooperation with the US.

We respectfully reject these assertions. The minister of justice, in authorising extradition proceedings, has a duty to satisfy herself that they conform to the provisions of Jamaican law. As minister and, especially, as attorney general, she cannot authorise processes which she knows to be in violation of Jamaican law.

Since this Government assumed office in September 2007, we have received 26 extradition requests from the United States. The mi-nister has issued the authority to proceed in 13 of those cases. In the cases of nine, these requests were made through provisional warrants, which went directly to the courts and, therefore, were not subject to the minister's authorisation.

We value the cooperation that has long existed between Jamaica and the US, especially in the area of law enforcement, because of the links between criminals in Jamaica and others in the US. We are firmly committed to the treaties and agreements between our two countries that underpin that cooperation.

We have assured the US authorities of our full support in all extradition and other matters consistent with our obligations under these treaties and agreements and the upholding of Jamaican law.