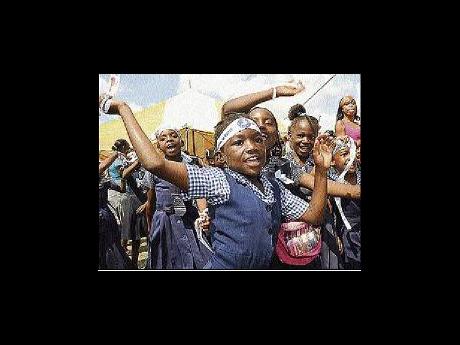 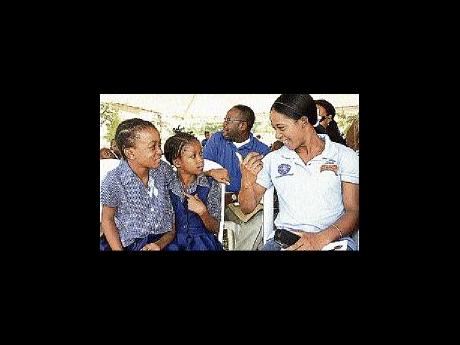 Peace Day yesterday proved to be about more than corporate sponsorship, wearing blue and singing songs.

Leaders from opposing factions in the Homestead and Morgan's Lane communities in St Catherine made a pledge at the end of the Peace and Love in Society (PALS) concert, held at Home-stead Primary, to put away their guns and work towards peace.

According to Lynch, the leaders were standing far away from each other before "they shook hands for the first time" at the end of the programme.

The Homestead Citizens for Action and Daybreak Foundation of Morgan's Lane, along with the Social Development Commission, Deputy Superintendent Sonia James-Thompson and Corporal Michael Williams facilitated the truce.

Justice of the Peace for St Catherine, George Moodie, said people in communities need to be educated as they have the wrong impression of the Jamaican police force.

A woman, her mouth filled with potato chips, shouted at a 12-year-old, telling him to move away from the grades one and two area. Another woman told him the police would "lock him up" if he did not behave himself.

"The police is made up of peacekeeping officers. Statements like those can only create hatred in the hearts of our youth," said Moodie, who is also chair-man of Homestead Primary's school board.

At the start of the concert, Ava McCalla, principal of Homestead Primary, welcomed students, UNICEF, officials from the ministries of education, youth and culture and national security, teachers and members of the community.

During the concert, students danced the latest dancehall moves to Gospel-infused lyrics, and an elderly woman did the Bogle dance to "a little more oil in my lamp".

The audience eventually took their seats, becoming quieter, and a woman pulled up her pants as she rocked to Fab 5 singing: "All we are saying is give peace a chance."