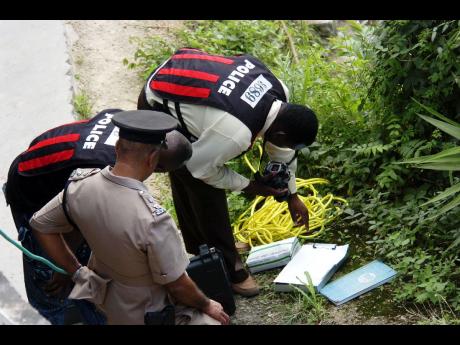 Illegal drugs, guns and ammunition are just three of the problems the Jamaican police force contends with daily.

THE MUCH-HERALDED six anti-crime bills, which have remained off the Government's priority legislative agenda for well over a year, are back in the news, following the publication of a United States report on Monday.

Failure on the part of Jamaican lawmakers to debate the critical pieces of legislation has not escaped the attention of the United States government.

"Five anti-crime proposals under consideration as part of an extensive agenda to address the widespread crime challenges have yet to be debated by Parliament," the report said.

Pointing to the "difficult economic situation" in Jamaica, the report said this had spawned a significant increase in aggravated crime such as larceny, robbery and rape.

"This, in turn, has placed a national spotlight on increasingly brazen criminal activity throughout the country, which continues to threaten civil society," the report read.

Commenting on plans to reform the police force as set out in the Police Strategic Review in 2007, Washington said these efforts had not yielded significant results in a police force which was "plagued by corruption and inefficiencies".