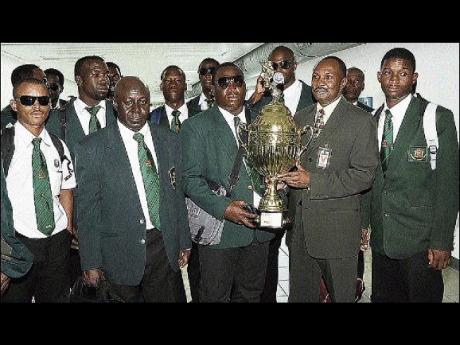 Tamar Lambert (centre) captain of Jamaica, and Paul Campbell (second right), president of the Jamaica Cricket Association, hold aloft the Headley and Weekes championship trophy shortly after arrival at the Norman Manley Airport yesterday. Coach Junior Bennett (second left, front) and other members of the team look on. Jamaica arrived home to a warm welcome after capturing the WICB four-day Championship for the third year in a row. -Ian Allen/Photographer

Jamaica's senior cricket team captain, Tamar Lambert, says this year's triumph in the West Indies Cricket Board (WICB) Regional Four-day Championship was the most memorable of the team's three titles over the past three years.

Speaking at a press conference at the VIP Lounge of the Norman Manley International Airport yesterday, shortly after the team's arrival from the eastern Caribbean, Lambert said at the start of the season the team had set a goal to do what no other Jamaican cricket team has done before - win the championship in three consecutive years. And, Lambert says, to see it happen was an overwhelming feeling.

"This year is more memorable given the fact that we are the first team to complete the hat-trick," Lambert said.

"It has been a very challenging season with a lot of ups and downs, but the guys were very supportive and gave their best all the time.

"I must congratulate the coaching and management staff and the players, they did a wonderful job," he added.

It was a close call as Jamaica needed to win the match outright, which they did eventually to overcome the challenge of Barbados - who held a nine-point lead heading into the final round and finished second overall.

"There was a little pressure towards the end," said Junior Bennett, the Jamaica coach. "Our batsmen struggled and it took our bowlers to put us back into contention.

"But, all in all, it was an all-round team effort and we are happy we were able to pull it off," he added.

Jamaica, who won five matches and lost one, ended on 60 points, three more than Barbados, who won four and lost two.

The Leewards (34 points), Trinidad and Tobago (33), Combined Campuses and Colleges (24) and Guyana and the Windwards (22 each), round off the standings.

"As we continue to grow older and get more mature we continue to get wiser, and this assisted us greatly in the competition, especially when we were in tight spots," Lambert continued.

"We will celebrate this success and look forward to build on it come next year," he added.

Paul Campbell, president of the Jamaica Cricket Association (JCA), thanked those who contributed to the cause.

"We are extremely proud of your efforts and would like to thank all those who made it possible. You are truly the best in the region," said Campbell.

Meanwhile, Ali McNab, special adviser to Minister of Youth, Sports and Culture, Olivia "Babsy" Grange, who was absent due to a sitting of Parliament, and Paul Campbell, said the victory shows that Jamaica's cricket is heading in the right direction.

"We are definitely doing something right with cricket in Jamaica, as in addition to the senior team's exploits, we could add the successes of the Under-19, Under-15, women, and blind cricket teams," said McNab. "On behalf of the Government of Jamaica we offer the heartiest of congratulations."