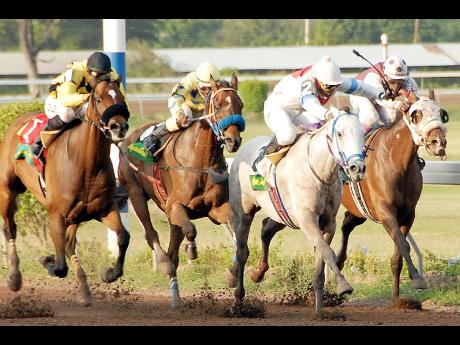 HAT-TRICK seeker IL CAIMANO ought to be followed when he takes on 10 rivals in the $450,000-$400,000 claiming race for the Tewfic Ziadie Memorial Cup over 1820 metres at Caymanas Park today.

Trained by Lawrence Freemantle, IL CAIMANO, who won the Governor's Cup (Lotto Classic) as a three-year-old in 2007 when trained by Anthony 'Baba' Nunes, has rebounded with a vengeance this season, winning both races by the combined margin of 25 lengths.

The son of Royal Minister-Needles Last cruised home by 19 lengths over 1500 metres on January 30 after being claimed out of his previous race by Freemantle on December 23.

The astute trainer obviously found the problem with IL CAIMANO, who duly won again in better company over 1600 metres on February 20, slamming RULE BY SECRECY by six lengths in the fairly good time of 1:41.1.

Freemantle is indeed fortunate that IL CAIMANO was not claimed out of his last race and, although stepping up in class today, his back class should see him through, now transformed under Freemantle's care.

Still, while clearly the one to beat, IL CAIMANO can expect stiff competition form another hat-trick seeker, EL DIABLO, as well as LUCKY EDDIE, who went down fighting against RIGGED TO WIN in the James B. Dawes Memorial Trophy over 1300 metres on February 13. RIFLEMAN, who is regaining form, and BLONDIE BLONDIE, who is not only down in class but has shown a particular liking for this trip, are also key dangers.

All should combine for the hi-five but IL CAIMANO looks the one they have to beat. Competent jockey Devon A. 'Pappa' Thomas again has the ride.

Elsewhere on the well-supported 10-race programme, Freemantle should also saddle SAMBA DANCER to win the first race over 1500 metres and FELICIDAD, now dropped in class, in the fifth race for $250,000-$210,000 claimers over the straight five course.

SAMBA DANCER, who last won over 1400 metres on December 2, has little to beat in the opener, especially now trained by Freemantle. The seven-year-old gelding looks leniently treated with 55.0kg and, with his December 5 winning rider Dane Nelson again at the helm, should lead home MR. WICKER in the eight-strong field.

FELICIDAD, who loves the straight, is back to his happy hunting ground and should emulate his November 29 course win on a $350,000 claiming tag. FELICIDAD beat RANKING in a good time over the course that day. RANKING paid tribute to the form with an easy win on a $450,000 tag last Saturday.

I also like OCHUN in the second race; CLASS ACT in the fourth; MR. JIM CEE in the eighth; and SKIPAWAY PRINCE over GREEN HORNET in the nightpan.