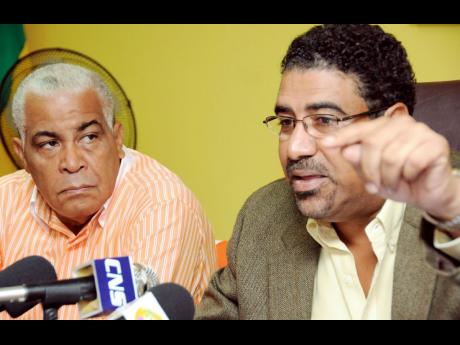 Refraining from an explicit call for the resignation of Tourism Minister Edmund Bartlett, the shadow minister for the portfolio, Dr Wykeham McNeill, yesterday said a report from Contractor General Greg Christie amounted to a vote of no-confidence in his ability to run the ministry.

"These are very serious allegations and we have to see some action taken on it," McNeill told
The Gleaner
yesterday after a press conference at the People's National Party's Old Hope Road, St Andrew, headquarters. "I am being encouraged by many to call for the resignation. I have taken the route of saying that the prime minister first should determine what (should be done). Let us see what action the attorney general deems is necessary."

Christie's report stated that the multimillion-dollar air service agreements between Jamaica and American Airlines (AA) were improperly and irregularly awarded. The report stated that the Bruce Golding administration was misled about details of the US$4.5 million airlift guarantee deal, which was signed before it was presented to Cabinet.

Contractor General Greg Christie said he had sent his report to the attorney general to "determine and to advise what appropriate and/or applicable actions may be taken or initiated" against Bartlett, John Lynch and Lionel Reid, having regard to all the circumstances of the case.

Lynch, the director of tourism, and Reid, executive director of Jamaica Vacations (JAMVAC), were also found by Christie to have played major roles in the alleged irregularities.

However, Bartlett, in a letter written to Prime Minister Golding dated March 1, rejected the findings, saying that the main intention of the group was to avert a significant hit to the island's tourism earnings. He also asserted that there was "total transparency" in the deal.

Bartlett said the deal with AA was pursued to prevent the subsequent loss of any routes and seats based on what they perceived was impending action from the airline.

In laying out his defence, Bartlett in the letter sought to explain that the procedures used to award the contracts were not irregular or improper. The minister pointed to what he said was the approval of the procedure by the Ministry of Finance and the Public Service and the attorney general.