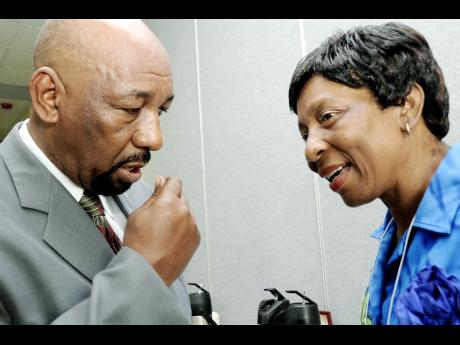 Edith Allwood-Anderson, president of the Nurses' Association of Jamaica, and Health Minister Rudyard Spencer in discussion during the launch of the report on 'The Nurse Labour and Education Markets in the English-speaking CARICOM: Issues and Options for Reform' at the Hilton Kingston hotel in New Kingston yesterday. - Rudolph Brown/Photographer

Officials from the World Bank have presented a report on the effect of the shortage of nurses across the English-speaking Caribbean, stating that it limits access and quality of health services and affects the region's competitiveness.

The organisation's comprehensive study,
The Nurse Labour and Education Markets in the English-speaking CARICOM: Issues and Options for Reform
, which was launched at the Hilton Kingston hotel in New Kingston yesterday, pointed to a rapidly growing shortage of nurses in the region.

It stated that, while there are approximately 7,800 nurses working in the English-speaking Caribbean, there are three times as many health workers from the region in Canada, the United States and the United Kingdom.

The report further noted that this critical shortage has tangible impacts that may compromise the ability of the countries to meet their key health-care services, especially in the areas of disease prevention and care.

Dr Evangeline Javier, director at the World Bank Human Development Department, disclosed that although a skilled labour force is already among Jamaica's assets, there is a shortage of workers, which is increasingly hampering the country's competitiveness.

"These shortages are being greatly felt in the health sector, weakening the quality and efficiency of health services," Javier said. "The shortages of nurses will only continue with the ageing of the population in the region."

An in-depth analysis of the report by World Bank officials indicated that migration is a major factor for the shortage, with more than 80 per cent of Jamaican nurses surveyed considering migration.

The report said approximately 75 per cent are dissatisfied with working conditions and noted that a limited training capacity was a factor for the shortages.

The report also showed that salaries in the region are extremely lower than destination countries such as the US, and that Jamaican nurses are among the health professionals in the region who receive the lowest compensation packages.

"It is urgent that the epistemic community and organisations, such as the United Nations, the World Health Organisation and the World Bank, exert their influence and raise their collective voice for an immediate and urgent assessment of the cost of migration of human resources in health," Health Minister Rudyard Spencer said in addressing the group.

He added that it was also important for them to determine an appropriate mechanism for compensating these developing countries.

Spencer said the Government was addressing the shortage of the professionals by amending the Nurses and Midwives Act for some categories of nurses to be given prescriptive rights, as well as by deploying new nursing recruits and those with up to two years experience to the primary health-care system.