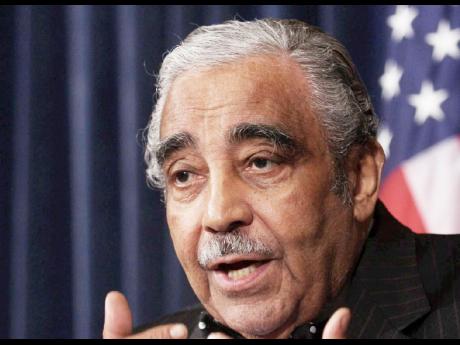 Charles Rangel, the chairman of the House Ways and Means Committee

A UNITED States congressman who was honoured by Jamaica last October has taken leave from office following claims of unethical conduct.

Democratic representative Charles Rangel, the chairman of the House Ways and Means Committee, announced yesterday that he would temporarily surrender his powerful post.

In a brief letter to House Speaker Nancy Pelosi, Rangel said he intends to remain on leave until a House ethics committee finishes its investigation.

The House Ways and Means Committee writes tax legislation in the United States.

Rangel was accorded membership in the Order of Jamaica, the fourth highest national honour, for his outstanding contribution in promoting the interests of Jamaica and the Caribbean.

"I am honoured to receive such an award, especially since it is normally presented to a Jamaican citizen. I have worked for 40 years in the Congress to be a friend of the Caribbean, and it is a good feeling to be acknowledged for this work," Rangel said in an article published on his website.

Earlier this week, the House Committee on Standards of Official Conduct found that Rangel knowingly violated House rules by going on two corporate junkets to the Caribbean in 2007 and 2008.

The ethics committee is also investigating Rangel's ownership of several rent-controlled apartments in New York, his failure to pay taxes on an offshore rental property and his use of office letterhead to solicit donations for a public-policy school that would bear his name.