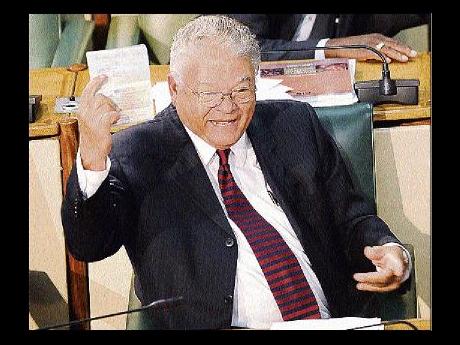 North Central St Andrew Member of Parliament (MP) Karl Samuda shows off a United States visa in his passport just before the start of Tuesday's parliamentary sitting at Gordon House. Samuda was, however, told by Central Westmoreland MP Roger Clarke that merely displaying one's visa did not verify its validity. Clarke quipped that Samuda would only know if his visa has been revoked when he gets to the airport, a facetious reference to the ordeal of Wayne Chen, chairman of state agency, the Urban Development Corporation. - Ricardo Makyn/Staff Photographer

AN UGLY spat unfolded in the House of Representatives Tuesday as Opposition members of parliament attempted to get Prime Minister Bruce Golding to reconsider his Government's decision not to extradite reputed don Christopher 'Dudus' Coke.

"I will go outside and say him is a CIA, but mek him go out and call mi criminal. I lock up him backside!" Samuda muttered in the House.

Phillips was pushed to the brink by perennial rabble-rouser Everald Warmington, the MP for South West St Catherine. Warmington had shouted across the floor asking why Phillips was fighting the extradition battle for the US. That comment infuriated Phillips.

"I am not fighting on behalf of the United States, I am fighting that Jamaica be free of criminals ... who are preying on our country. That's what I am fighting for. Don't you question my patriotism inside here! Don't you ever question it!" Phillips shot back.

In the heat of the moment, Samuda, general secretary for the governing Jamaica Labour Party, called Phillips a CIA operative. Phillips responded three times, saying, "And you are a criminal."

Warmington and fellow government member Pearnel Charles then rose and demanded that the comment be withdrawn. Phillips obliged, but only after instructions from House Speaker Delroy Chuck.

Chuck later scolded Warmington for his behaviour, telling him that he was not only unfair but provocative.

At that point, the microphones in the chamber went dead and it provided breeding ground for an abundance of crosstalk and insults.

Daryl Vaz, a member of the governing party who represents West Portland, accused Phillips of displaying a holier-than-thou attitude.

"Him go a gunman funeral and a gwaan like him virtuous," Vaz snapped.