Two years into job...Llewellyn aims to grease wheels of justice 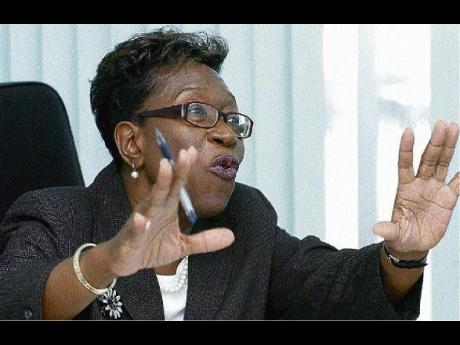 Director of Public Prosecutions (DPP) Paula Llewellyn, QC, has reported that an increase in crime, including police shootings, has added to the workload of her office.

"I am pleased with where the office is but I am always conscious that it is a work in progress," said Llewellyn, who will, on Friday, be celebrating her second year in office as DPP.

She is hoping that legislation will be passed soon for majority verdicts to be accepted in murder cases. She said such a move would assist in neutralising the potential of corrupt jurors and thus prevent adverse verdicts.

The Crown cannot file appeals in criminal cases, but Llewellyn has been agitating for laws to be passed for the Crown to have right of appeal and notices to be served on the prosecution when an accused intends to raise an alibi.

She hopes there will be amendments to the law so that court orders can be obtained for DNA to be taken from accused persons in an effort to solve crimes.

She also believes that case management will make her office more accountable.

"We are not afraid to take on this new responsibility and can only hope that members of the private Bar share in the vision in what case management can do to clear the backlog," Llewellyn told
The Gleaner
.

When the Hilary session of the Home Circuit Court opened in January, there were 425 cases on the list, most of which related to murder.

Llewellyn said she is leading a thrust for transparency and accountability in the Office of the DPP in a bid to raise public confidence and general awareness.

"As far as we are concerned, we try to translate and simplify the legalese," she said.

Llewellyn said she is aiming for her office to become a model judicial body. She explains that her tenure as DPP has been, in part, a rough ride, but she has managed to lift the morale in the office and push managerial best practices.

The heavy workload in her office has resulted in staff working late at nights, she said, even on weekends, and for that Llewellyn is not sparing in praise.

"Humility must be the underbelly of one's success and you must not forget where you are coming from and I don't forget that I and my team are serving the people," Llewellyn stressed.

She said she was grateful that she has been given the opportunity to serve the people of Jamaica.

Llewellyn speaks highly of her staff and says despite the low salary, she has a team which is highly motivated, hard-working and always willing to go the extra mile.

"She has a cheerful and sunny disposition. She is always smiling, always in a good mood. ... She is easy to approach and I consult with her and seek her advice on various matters that we have to deal with.

"She approaches her work in the office very seriously. She gets her teeth into a matter and she really gives it her all," he added.