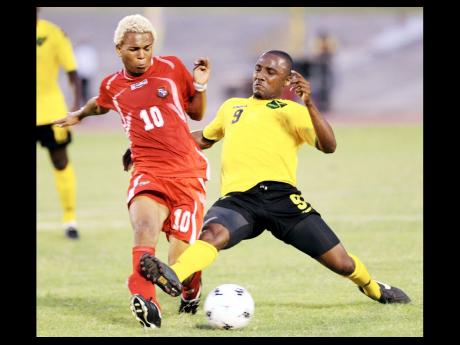 Jermaine Johnson(r) makes a tackle on a Panama player in a friendly last year. Jamaica won 3-2

Jamaica's Reggae Boyz are the Caribbean Football Union's number-one team for the fourth month in a row after climbing one spot up the FIFA world rankings yesterday.

The new FIFA Coca-Cola rankings, released yesterday, showed the Jamaicans moving up to 77th, while their nearest regional rivals, Trinidad and Tobago, dipped one place to 85th. The latest world ratings also created several adjustments among the region's top 10 teams.

Cuba dipped from fourth to sixth, allowing Guyana and Antigua and Barbuda to each climb one place up to fourth and fifth, respectively. Barbados also suffered a two-place drop on the regional chart to ninth, while Grenada stepped up to seventh, and Bermuda to eighth.

The Jamaicans, who surrendered a 1-0 lead late and lost 1-2 to Argentina in a friendly a month ago in Mar Del Plata, have led the CFU list almost every month since winning the Digicel Caribbean Championship in December 2008.

T&T were number-one in June and September last year, the only break in Jamaica's dominance.

Haiti, up five places on the world list to 90th, retain third position in the CFU, while Guyana moved up to fourth with a six-place jump to 120th in the world, and Antigua and Barbuda claimed fifth spot in the region with a move from 127th to 123rd in the world.

The USA's reign as CONCA-CAF's number-one team ended after 15 consecutive months when they slipped four places down to 18th and Mexico moved past them with a two-spot climb to 14th.

There is no change among the world's top brass with Spain retaining the number-one spot ahead of Brazil, the Netherlands third and Italy fourth. Germany improved one place to fifth ahead of Portugal and France, while England moved up one place to eighth, relegating Argentina to ninth.