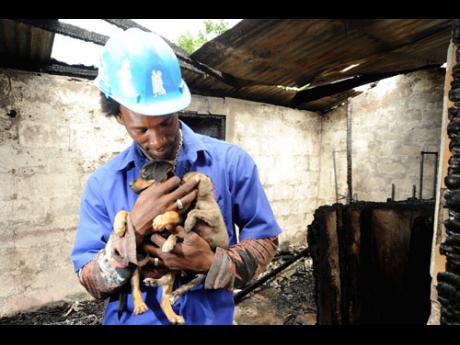 Alvin Alberga, a 35-year-old truck driver who lost his two-bedroom house in a fire, stands with his puppies, 'Black Girl' and 'Pitgrel', inside his burnt-out home yesterday. The blaze occurred approximately 8 a.m. at the Bay Farm Road, St Andrew, property.- Ricardo Makyn/Staff Photographer

Thirty-five-year-old Alvin Alberga is uncertain about his next move in life.

Alberga lost almost all his belongings in a fire that engulfed his two-bedroom apartment on Bay Farm Road, St Andrew, yesterday morning.

With only the work uniform he was wearing and his five puppies as company, Alberga said he was living in hope and depending on God's mercy for survival.

"I don't know what I am going to do because I lost everything. Even my savings of $135,000 that I could have now used to put myself back on track is gone. All I found is half of a thousand-dollar note," he said.

Alberga said he was at work when he got a telephone call informing him that his apartment was on fire.

While traumatised by the loss of his home, Alberga's mood was lifted when he spoke about his puppies that narrowly escaped death in the blaze.

"All I can be happy about at this moment is that my five friends are alive," he said, as he boasted about the relationship he shares with his animals.

"They are always happy to see me when I reach home in the evenings, so when I realised that they were saved, I felt so good. Even though I am so confused now, I have to save a space to celebrate that they were not hurt."

He said what puzzled him the most was the cause of the fire, which had yet to be determined.