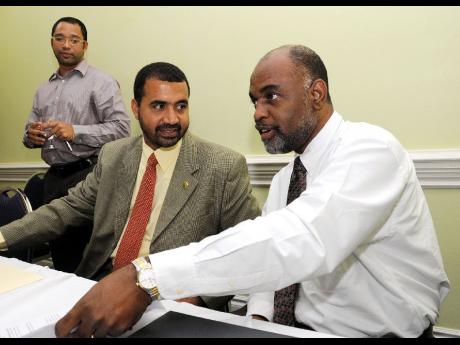 AN ALLIANCE of health professionals is joining the island's nurses in harshly criticising the Government over the sector's yet-to-be implemented job evaluation and reclassification exercise.

The Joint Health Sector Group has rejected the final report released by the Government last month, arguing that it contains several weaknesses and areas of concern.

"When we examine the process with a critical eye, when we look at the approach and methodology, we must say that this exercise is flawed, bastardised and must be rejected," argued Dr Winston De La Haye, president of the Medical Association of Jamaica (MAJ), during a press conference held at the Knutsford Court Hotel in St Andrew yesterday.

De La Haye said the members of the Joint Health Sector Group, which represents a significant percentage of health personnel in the country, all shared a common concern about the objectivity and reliability of the evaluation and reclassification exercise.

He said the group was shocked to learn that three groups worked independently of each other in contributing to the development of the final report, and claimed the exercise was discriminatory.

"Based on international standard, you must examine all jobs in the health sector ... and use a consistent and objective method to rank them," he said.

De La Haye said that, instead, the jobs in only one of the 28 groups of health workers were examined in the review, using different methods and techniques. He said the results from this examination were applied across all other jobs in the sector.

"An important recommendation in any evaluation exercise is that jobs be placed in homogeneous groups," he said. "The approach they took was to use the same standard for administrative, technical and professional jobs which is inappropriate. There are international standards to be applied, which were ignored in this exercise."

De La Haye further complained about the method used to determine the pay structure, which he said was highly subjective as the Government used a relational method with a built-in bias which adversely affected many groups.

He said the team has asked for a meeting with the finance and health ministries, the outcome of which he expects would determine their course of action.