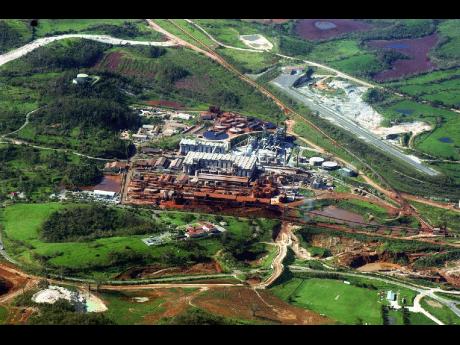 The Windalco Kirkvine bauxite plant in Manchester, as seen in this September 2004 Gleaner photo, is owned by UC Rusal. - File

THE WEST Indies Alumina Company (Windalco) will bring its decades-old involvement in bauxite production in Jamaica to an end when it makes its 762 permanent employees redundant on March 31.

The redundancy exercise, expected to cost tens of millions of dollars, comes a year after the company suspended production at its Kirkvine, Manchester, and Ewarton, St Catherine, refineries because of reduced demand for aluminium on the world market.

Windalco, a joint venture between the Government of Jamaica and the Russian entity, UC Rusal, the world's largest producer of aluminium and alumina and which owns 93 per cent of the company, has been operating in Jamaica for more than 50 years.

Acting Managing Director Andrew Currie, who originally announced the redundancy exercise in January, said then that the measure was in direct response to feedback from many employees.

Despite there being some improvement in the global economy, following the economic meltdown of 2008, the alumina industry has seen only marginal movement. And with no end in sight for the period of production suspension, Currie had explained that the company's management felt it would also be in the best interest of Windalco to make the positions redundant.

The fall in demand for alumina on the world market because of the recession dealt a severe blow to the Jamaican economy, which is heavily dependent on foreign-exchange inflows from sectors such as bauxite and tourism.

The bauxite/alumina industry, on average, brings in more than $1 billion in annual gross earnings.

The termination of the services of the workers means another upward movement in unemployment figures. However, the management of the company has offered financial counselling sessions to the workers to assist in planning their finances.

Yesterday, Kayon Wallace, Windalco's senior communications officer, declined to comment on the pay package for the workers. She said however that, as of April 1, a 'take-care' organisation comprising a small complement of contract workers will be responsible for preserving the company's assets and meeting legal and community obligations.

Wallace said that despite the redundancy exercise, the company will still be involved in agricultural activities that formed part of its original mandate.

Wallace said the tenant farm programme would continue, so too cattle farms in St Ann and Manchester, which consist of dairy and beef stock. In addition, its third party business at Port Esquivel will also continue.

At the heights of production in 2006, UC Rusal, which also has shares in Alpart, was responsible for more than 52 per cent of the 15 million tonnes of alumina produced in Jamaica. The figure represents 23 per cent of UC Rusal's total global output.