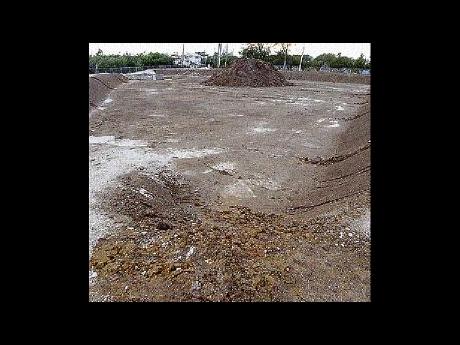 A proposal to facilitate a treatment site at Palisadoes Park, for remnants from the American Airlines Boeing 737-800 aircraft which crashed on the Port Royal road in December last year, has come under fire from at least two groups.

The Jamaica Environment Trust (JET) and the Royal Jamaica Yacht Club (RJYC) are opposing the location of the site, arguing it could compromise the immediate environment.

The site, which is currently under construction, is located beside a playing field at the Caribbean Maritime Institute (CMI), which is adjacent the RJYC. The material, deemed contaminated by the environmental group and the yacht club, has not yet been transferred from the crash site.

Tractors and rollers were preparing the site on Tuesday, while a large group of students from the CMI trained for a game of football.

JET Executive Director Diana McCaulay told
The Gleaner
her organisation was against the relocation plan, as the Palisadoes-Port Royal Area was a protected environmental area under the Ramsar Convention.

The Ramsar Convention is an intergovernmental treaty that provides the framework for national action and international cooperation for the conservation and wise use of wetlands and their resources.

"I do not believe that it should be done in the Palisadoes area, as it is a low-lying area. I believe that the contaminated material should be sent back to the United States," McCaulay said.

The procedure for cleaning the affected area is called land farming, a method of remediating contaminated soil. Land farming relies on a number of natural processes to provide degradation of any contaminants present in the soil.

Charlton Campbell, head of the CL Environmental Company Limited, which has been contracted by American Airlines to execute the project, said the site's protection under the Ramsar Convention does not mean it cannot be used. He, however, refused to comment further.

Though
The Gleaner
has, since Tuesday, sought a reponse to the claims from the National Environment and Planning Agency (NEPA), which is overseeing the construction of the site and the clean-up process, no information has been forthcoming.

Roger Morecroft, commodore of the RJYC, said he was concerned about the substances which would be brought to the site.

In a letter addressed to NEPA on February 27, the group called for an immediate stop to the work being done, saying, "This poses several environmental issues and will pose a health risk to the students of the CMI and members of the RJYC as a result of the toxic soil being brought into the area."

The letter continued: "The risk, when leaching occurs, will cause the contamination of the nearby wetlands and our marina, thus eradicating the marine flora and fauna in the area."

Morecroft contends that some of the substances which would be brought to the site would include jet fuel components. These components are made up of hydrocarbons, some of which are not environmental hazards.