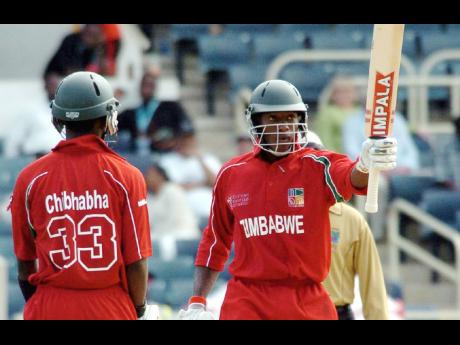 Zimbabwe's Vusimuzi Sibanda ... named Man of the Match after his top score of 95. - file 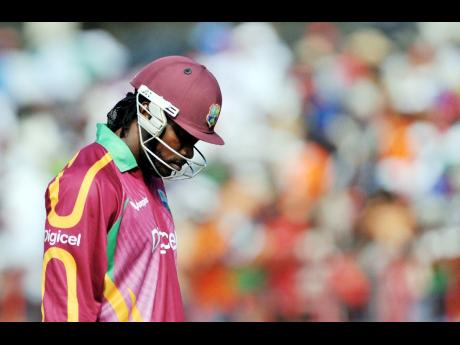 Troubled West Indies sunk to a new low yesterday when they crashed to a nervy two-run loss to Zimbabwe in the opening one-day international (ODI) of the five-match series here.

Requiring 15 from the last over to overhaul Zimbabwe's 254 for five, West Indies came up short at the National Stadium at Providence, tumbling to their 11th loss in their last 12 ODIs.

The defeat came on the heels of the embarrassing loss to Zimbabwe in the one-off Twenty20 International in Port-of-Spain on Sunday, and extended new coach Ottis Gibson's unflattering start as the head of the beleaguered regional side.

West Indies got half-centuries from Shiv Chanderpaul (70), captain Chris Gayle (57) and Adrian Barath (50), and seemed en route to a comfortable win at 126 for one in the 30th over, before imploding spectacularly to lose their next eight wickets for 126 runs and plunge to yet another dreadful defeat.

Earlier, it was Vusimuzi Sibanda's superb knock of 95 that set up Zimbabwe's total after they won the toss and opted to bat first.

An organised right-hander with a calm temperament and a fine range of shots, the 26-year-old produced a measured innings as he engineered three crucial partnerships which held the innings together.

Capitalising on a Windies attack that lacked real thrust, Sibanda stroked five fours and a six off 162 balls before he was eventually out in the penultimate over of the innings to a brute of a yorker from speedster Kemar Roach.

It was the second time in as many innings against West Indies he had missed out on three figures, after he was run out for 96 when he last faced the Caribbean side three years ago in Bulawayo.

Gayle and Barath spent 23 overs in adding 99 for the first wicket but even then there were no warning signs of what was to come.

The left-handed Gayle looked in good touch, smashing two fours and three sixes off 66 balls while Barath faced 96 balls and struck four fours and a six on ODI debut.

Zimbabwe struck the crucial blow, however, when Gayle was lbw to off-spinner Greg Lamb to the last ball of the 23rd over, after the left-hander had spent the last nine balls gathering six runs.

Barath, strangled by Lamb and his leg-spinning partner Graeme Cremer, tried to free his arms against medium pacer Elton Chigumbra (2-32) but succeeded only in dragging on to the third delivery of the right-armer's first over at 126 for two.

André Fletcher (6) and Narsingh Deonarine (17) went via the run out route, and when Kieron Pollard chipped a simple catch to Brendan Taylor at mid-on off off-spinning captain Prosper Utseya, West Indies had slumped to 193 for five in the 43rd over, with 61 still needed from 46 balls.

With Ramdin struggling 16 balls over eight runs, Chanderpaul stepped up the gear to dominate a 31-ball, 40-run stand for the sixth wicket, shining in an innings garnished with four fours and a straight six off Chigumbra.

Both batsmen fell within the space of five balls for the addition of just two runs, leaving West Indies on 240 for seven at the end of the 49th over.

Nikita Miller belted the first ball of the final over from pacer Hamilton Masakadza (3-36) over midwicket for six and edged the second to third man for four, raising hopes of a dramatic Windies victory.

A single to deep cover of the third ball brought Dwayne Smith (4) into strike but he was bowled off the next delivery. Sulieman Benn was brilliantly taken in the deep by Cremer off the fifth ball and a single off the last ball was not enough.

Man of the Match:
Vusimuzi Sibanda.