Ardenne High on the double 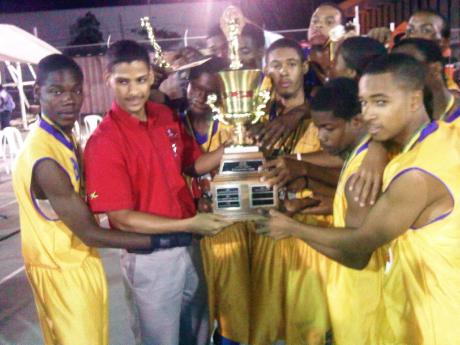 Rohan Halsall (second left), marketing coordinator of KFC, hands over the all-island trophy to members of the Ardenne team on Wednesday at the National Stadium. Ardenne won the title by defeating Herbert Morrison 66-53 in the final. - photo by Robert Bailey

Basil 'Spider' Barrett, coach of ISSA/KFC All-island Under-19 champions Ardenne High, believes hard work and dedication were the key factors which contributed to their capture of a fine double in this season's competition.

Ardenne, who earlier won the Southern Conference title, captured their second title of the season on Wednesday by defeating Herbert Morrison 66-53 in the final at the National Stadium.

Barrett said: "I am feeling very elated. My players worked very hard all season, and I must also big up the other members of my coaching staff, because they devoted a lot of their time to make this possible.

"We put in a lot of hard in the summer because we started training from August, and when we asked the guys to turn up for training they were always willing to come out."

Dimitri Gage led the way for the Ardenne with a game-high 18 points. Ardenne, who held a 34-30 lead over Herbert Morrison at half-time, came out firing in the third quarter, courtesy of Gage, who scored nine points, as they outscored their opponents (19-6) for a 53-36 lead at the end of the period.

In reflecting on his team's performance in the final Barrett said: "This was a great performance from us because we came out shooting in the first half, and in the second half the breeze was against us, and so we went inside to our big men and this paid off."

Meanwhile, in the Under-16 final, St George's thrashed Knox College 56-37. Jhawn Graham led the charge for the champions with a team-high 14 points, and received solid support from Shavair Francis, 13 points, and Rasheed Andrews with 12 points and 12 rebounds.

Michael Johnson of Knox had a game-high 16 points. Clifford Brown, coach of St George's, said he was delighted with his team's performance.

"We performed very well because I think we fought really hard for this championship," said Brown.

Graham was voted the Most Valuable Player of the final.