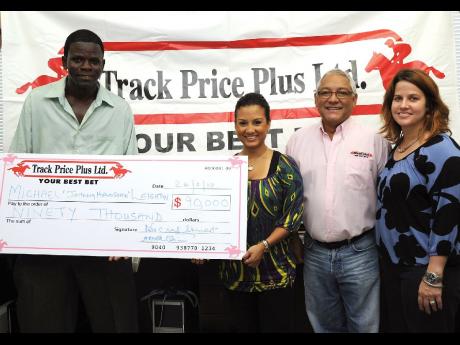 Michael 'Johnny Handsome' Leighton (left) receives his $90,000 first prize for having topped the 2009 Star/Track Price Plus Pick-6 tipsters' competition with most wins. Making the presentation is Arnella Chin, operations manager of Track Price Plus, as her father, Xavier Chin (second right), the company's CEO, and Amber Stewart, chairman, look on.- Norman Grindley/Chief Photographer

Xavier Chin, president of the United Bookmakers Association (UBA) and chief executive officer (CEO) of Track Price Plus Limited, says the role of the bookmakers in Jamaica has been misunderstood.

Speaking at the annual presentation for the popular Track Price Plus/
Star
tipsters' competition at the company's Premier Plaza head offices recently, Chin disclosed that licensed bookmakers have contributed $145 million annually to government coffers and provided employment for hundreds.

Yet, he was quick to point out that they are treated indifferently by the powers that be.

"People in high places call us parasites but they conveniently overlook the contribution of the bookmakers to the racing industry," said Chin.

"The perception is that we do nothing for racing," he added. "The reality is we do a lot without fanfare.

"Last year alone, the United Bookmakers Association comprising Track Price Plus, Champion Betting and Markham sponsored the Jamaica Derby to the tune of $2.5 million, while our company contributed over $1 million to the Track Price Dig-Out handicaps which covered over 40 races, and offered cash incentives to jockeys, trainers and grooms.

"Track Price are also sponsors of the popular tipsters' competition which appears in the
Track & Pools
and
The STAR
on the eve of each raceday.

"If that wasn't enough, Champion Betting Limited donated substantial prize money for sponsorship of the Champion Claiming Series which ran from July to December last year, while Champion and Markham are co-sponsors of the all-media tipsters' competition which appears in
The Gleaner
each raceday. "Our overall sponsorship relating to racing activities also extend to programmes on the air-waves, etc," he said.

In light of this, Chin said he would like to clear up the misconception and misinformation about the role of the bookmakers.

He is of the view that the 250 per cent increase in rights fee recently imposed on the bookmakers by the state-owned Caymanas Track Limited was exorbitant. This moved from 1 to 3
1
/
2
per cent and, according to the CEO, the bookmakers are paying under protest and have withdrawn sponsorship from all races as a result.

"Don't get me wrong ... The bookmakers are not in objection to an increase in rights fee. However, we must in turn get a service for it, for instance, the equivalent to what we get from the foreign feed ... live data, previews, pictures, odds, results and dividends.

"All we get from CTL are the programme and a delayed dividend on radio. No extended opening hours for us, even though our shops remain open to sell cash pot and other lotteries to the public."

Chin felt the 16
1
/
2
per cent gross profit tax currently paid by the bookmakers should be reduced to 11 per cent.

"This would enable the track to get a proper rights fee," he argued.

"Instead of harassing the legal bookmakers who, unlike CTL, take the risks and can lose millions of dollars on any given day, the focus should be on the illegal bookies."