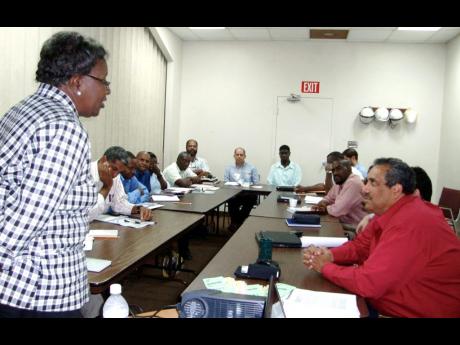 In a move to influence student behaviour in central Jamaica positively, bauxite company Jamalco recently engaged all its managers and some supervisors in a training workshop aimed at certifying them as mentors.

The training session was designed to equip the workers with the skills and aptitude necessary to counsel teenagers participating in the Jamalco mentorship programme at Vere Technical High School in Clarendon.

Former guidance counsellor Grace Campbell, who led the workshop, commended the leaders for offering themselves as mentors, and encouraged them to give the youngsters hope and an opportunity to fulfil their potential.

As part of the training, the Jamalco workers engaged in simulation exercises preparing them to assist teenagers in coping with real-life crises such as drug abuse, parental neglect, among others.

Addressing the workshop, manager of corporate services at Jamalco, Leo Lambert, who spearheaded the mentorship programme, said helping to mould character was one of life's most rewarding pursuits. He added that many persons who were regarded as failures today could have become productive and positive human beings if someone had taken time out to care.

"This mentorship programme is about helping young people to be the best that they can be," said Lambert.

Commenting on the impact of the Vere Tech mentorship programme, which the company started in the 2008/2009 academic year, Lambert said there has been a marked improvement in student behaviour.

Mentors are expected to be in regular contact with their mentees and attend meetings of the Excellence Club, which is a feature of the bauxite company's mentorship programme.

The newly trained mentors are to be assigned to mentees in three schools in Jamalco's operating areas in Manchester and Clarendon. Winston Jones High School in Manchester and Lennon High School in Clarendon are to be assigned mentors shortly. Efforts are being made to mobilise the entire Jamalco workforce to participate in the mentorship programme.