Campbell: Success not by chance 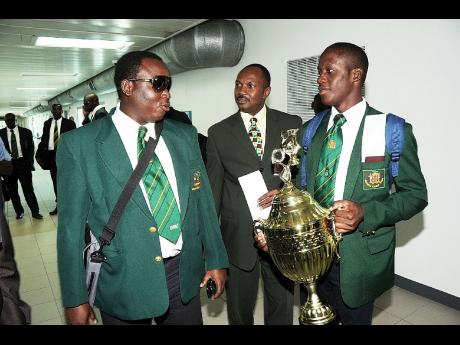 Tamar Lambert (left), captain of Jamaica, and teammate Nkrumah Bonner (right) with the championship trophy shortly after the arrival of the national cricket team at the Norman Manley Airport on Tuesday. Jamaica Cricket Association president, Paul Campbell, looks on. - Photos by Ian Allen/Photographer

Jamaica Cricket Association (JCA) president, Paul Campbell, is heaping praise on the vision and mission of the organisation for Jamaica's successes over the past three years.

According to Campbell, the success of the national senior and junior men and women teams is a testimony to a foundation laid by the JCA, as far back as 2002, under past president Jackie Hendriks, and hard work and commitment on the part of the organisation's volunteers.

"At the outset, the JCA outlined our programmes and plan of action, and if you were to do an evaluation of our programme against the success you will see that we are on target in terms of our achievements," he said, while making reference to Jamaica's senior team recent record-breaking four-day 'three-peat' success.

"We are elated and happy with the success of the team, given the effort, resource, investment and commitment from a team of volunteers, and player participation over the past couple of years.

"When you reach a stage where you see effort bearing fruit in not one, not two, but three years, you are really filled with joy," he added.

Jamaica, after being made to sweat in the final round of this year's championship, triumphed by three points over Barbados.

Their success comes in the wake of a successful 2008/09 season, when the country won the regional Under-15 and Under-19 crowns, the women's senior and Under-19 championships, and the blind cricket competition.

Said Campbell: "We must not only focus on the senior programme, as we must point out that our youth and women's programmes have also been doing very well.

"The Under-15s, for example, who go off shortly for the regional championship, are also double defending champions. This year they are also going for the three-peat.

"These are accomplishments that we are proud of and we hope to continue on that path by taking Jamaica's cricket and, by extension, West Indies cricket, to higher paths."