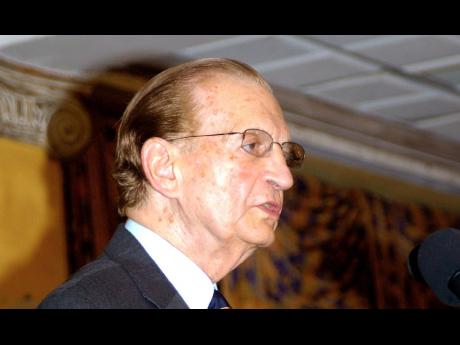 Former Prime Minister Edward Seaga addressing those gathered at the launch of his book, 'Edward Seaga: My Life And Leadership, Volume One: Clash of Ideologies 1930-1980', held at the Mona Visitors' Lodge on Wednesday. 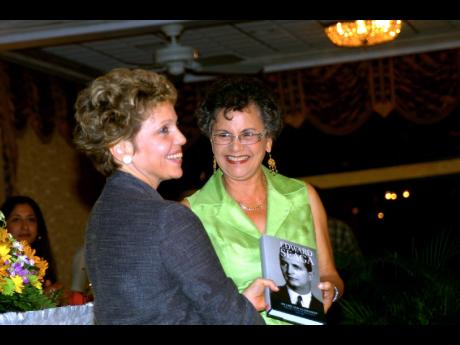 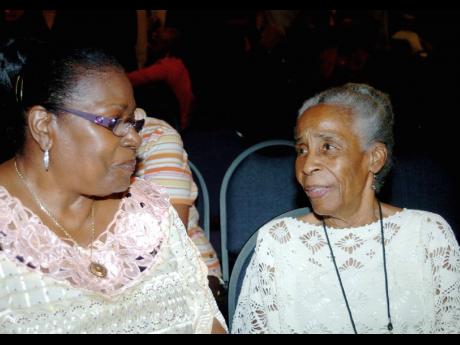 Janette Grant-Woodham (left) and Olive Lewin at the launch of Edward Seaga's book at the Mona Visitors' Lodge on Wednesday. photos by Winston Sill/Freelance Photographer
1
2
3

Former Prime Minister Edward Seaga employed his famed dry wit as he spoke at the launch of
My Life and Leadership
at the Mona Visitors' Lodge on Wednesday evening.

"I was not supposed to be even here this evening. It is early yet. This is an autobiography," he told the full house. And there is more to come, as the book is subtitled
Volume 1: Clash of Ideologies 1930-1980
.

However, those who may have anticipated, if not a clash then certainly a slash or two of the tongue, were disappointed, as knee surgery kept journalist and specially invited guest Wilmot 'Motty' Perkins off the University of the West Indies (UWI) Mona campus that evening. Seaga, as well as UWI Mona Principal Gordon Shirley, expressed disappointment, Seaga saying Perkins had been specially chosen because of the 'Clash of Ideologies' subtitle.

So the analysis fell squarely to Professor Barrington Chevannes, who made the connection with the late Professor Nettleford's life work, "the assertion, recognition and validation of the African presence in the lives of Caribbean people". The autobiography, Chevannes said, "is done once or not at all" and he congratulated Seaga on "this bold exposure of himself."

Chevannes captured the connection between Seaga and Jamaica by saying that Edward Seaga came, he saw, he was conquered. He fell in love and spent the rest of his life in toil with his beloved.

That meant crossing of boundaries, Chevannes speaking of the 'two Jamaicas', not only in the material sense but also thinking, one infamously dismissed as the 'mud' and the other celebrated as the 'gold'. Seaga was, Chevannes said, someone in the right place at the right time by a combination of events - many by chance, "in love with the mud and, most critical of all, with the means and power at his disposal to validate this love.

"His was not the power of the word, but the power of the deed," Chevannes said, going on to note the numerous institutions and events Seaga was involved with, including the Jamaica Stock Exchange, the Urban Development Corporation, the Students' Loan Bureau and the return of Marcus Garvey's body to Jamaica. There are also those which faded, among them the 100 Villages Programme and Things Jamaica.

At the end of his address, Chevannes declared "this historical record of a man in love with a people and a country launched."

Seaga said the first volume of his autobiography had taken two years to write, another year going into "the other things that happened after the writing". He said "it soon became apparent that one volume would not be sufficient" and MacMillan Publishers was hesitant about doing two parts. "The way this first one will end they will want the next one," Seaga told them confidently.

"I try to be as dispassionate as I can be about the period," Seaga said, noting that the decade began with an opportunity to change his life. "I had two offers to head up banking institutions. For reasons I still do not know, I did not," he said, one of those institutions being the Caribbean Development Bank.

Seaga recounted his daughter asking where he was going as he ate breakfast at home on his final day in Parliament. He told her "I am going to Parliament to retire," and she laughed. "She knows her Daddy does not retire," Seaga said, commenting, "retiring is too tiring".

So, with a lot of energy left, he speculated about a volume two and closed with "I look forward to being in the service of the people of Jamaica, to whom I have dedicated the book with pride and honour."

Seaga's service at UWI has been extended, with two years added to his tenure as Distinguished Fellow.

Nicholas Gillard of MacMillan Publishers described Seaga as a "model author" and a "stickler for deadline" and there was laughter when Suzanne Lee of distributors Novelty Trading Company said Seaga gave permission to use his 'Adonis photograph' on the cover.

Volume 2, subtitled
Hard Road to Travel
, is slated for release later this year.