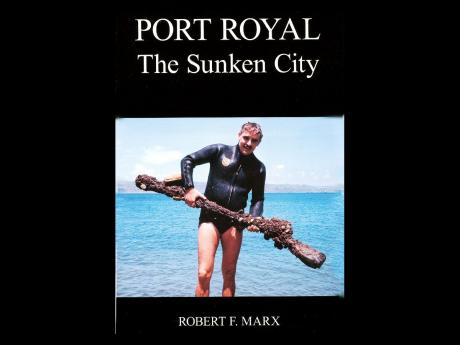 The fascinating stories of Port Royal are well known. The events that transpired there, from the days of plundering pirates to the historic earthquake that caused much of the wicked city to sink to the bottom of the sea, are quite familiar. Through the ages, these stories have become legend and one of many persons fascinated with them was Robert Marx. In his book,
Port Royal The Sunken City
, Marx recounts the events that were the fulfilment of his childhood dream: a two-and-a-half year exploration of the historic Jamaican port. The first investigation of the site by a trained marine archaeologist, his expedition discovered thousands of well-preserved remnants of 17th century life, including wooden tools and silver and pewter ware.

Of course, it wasn't as easy as simply taking a dive and bringing these items to shore. Port Royal lived up to its reputation and fought Marx and his crew all the way. The veteran explorer contended with a painfully thin budget, murky, polluted waters, angry sharks, eels and crabs; razor-sharp corals and ancient, feeble walls on the verge of collapse. Danger was always at hand and the success of the exploration is testimony to the mettle of the explorers.

Though he has explored some 3000 shipwrecks and dozens of sunken cities in 62 countries over the last 50 years, Marx was still in awe of the secrets that Port Royal had to tell and was intent on revealing the mystery of the place. In this gripping account of the expedition responsible for retrieving much of our island's history, Marx blends real-life adventure, thrilling suspense and colourful history. It is a great read for anyone interested in deep-sea exploration and for those wanting to know more about Port Royal. It won't disappoint.