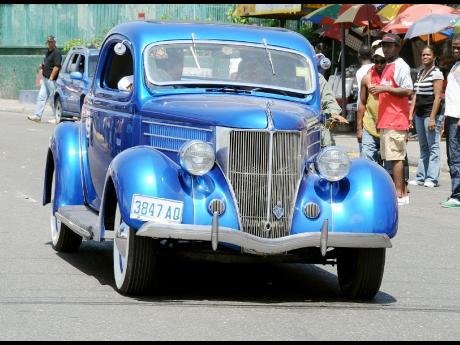 Classic car owners are breathing a sigh of relief as the roadblock caused by E10 gasolene appears to be averted. "We have been working hard and coming to terms with E10," Merrick Reid, president of Jamaica Classic Car Club, told
Automotives
.

Since the islandwide rollout November 1 last year, classic cars were sidelined as neither the ethanol-based E10 87 nor its 90 octane mix are compatible with vehicles manufactured before 1986.

This placed classic cars - 24 years and older - in the midst of a fuel crisis.

"We have now found some solutions ... it's not 100 per cent, but it's a solution nonetheless," Reid told
Automotives
.

The president, who assumed office in 2007, said based on intensive Internet

research and some innovation, his organisation has found a
"man-in-the-street solution."


"We've found that various additives, octane boosters and
non-alcohol based treatments tend to lessen the negative effects of the E10," he
said.


"The CRC fuel stabiliser from Bearings and Seal, as well as the
STA-BIL ethanol treatment works well," he continued.


Reid, who owns a 1936 Ford Coupe, as well as a vintage motorcycle,
has some 'home blends' which he swears by.


In November, Reid expressed concerns that ethanol-based fuel
causes water formation in the gas tank if left for an extended period. And, with
classic cars this is quite likely to occur since they are not driven on a daily
basis.


The president cautioned those who would wish to use the home-made
solutions, saying that they are quick fixes and not long-term remedies.


"These are short-term solutions, so the long-term effects are not
yet proven," he warned.


"But for now, we will be keeping our classic cars and making every
effort to keep them running," he added.