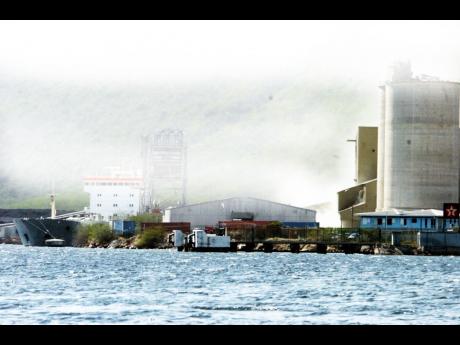 A section of Caribbean Cement Company's Rockfort plant is seen from the sea, May 2006 - File

The Anti-Dumping and Subsidies Commission (ADSC) has given itself another 45 days to complete its investigations of Vulcan cement, which was introduced to the Jamaican market more than a year ago when Tank-Weld Metals entered the cement-distribution market.

Caribbean Cement Company Limited (CCCL) alleges that the American-made product is being sold on the Jamaica market at dumped prices, that is, at a lower price than it cost to produce the cement.

The ADSC probe was originally to be finalised in three months on February 24, but up to that point, the agency was still awaiting the submission of documents on which to make its determination.

"The extension is due to the difficulty of obtaining satisfactory evidence in the investigation and other and procedural challenges that made it unusually difficult for the commission to decide within the 90 days," said Commissioner Velma Brown-Hamilton in a statement.

The ADSC now expects to complete its probe by April 9.

CCCL marketing manager Alice Hyde told
Sunday Business
that her company was not perturbed by the delay, saying the commission had a statutory right to extend the deadline.

"So we are waiting, patiently," Hyde said.

The official complaint was made last September, and although a defendant was not named in a release to the media at the time, the product's only known distributor is Tank-Weld.

Caribbean Cement, in its complaint, cited a World Trade Organisation report that Vulcan was selling its cement to Jamaica at rates below fair market prices, stating that the low price offered by Vulcan was not reflected in the rate of the imported cement on the local market.

At the time of the official complaint, the Trinidad-owned company said there was a 71.5 per cent difference in the sale price of Vulcan and the retail cost on the local market, and charged that the matter involving Vulcan Materials Company was an example of an American company deliberately taking market share and sales away from the Jamaican cement manufacturer.

But Tank-Weld's chief executive officer, Chris Bicknell, said Wednesday that the Anti Dumping Commission's decision to extend its investigation was an indication that the matter was not an open-and-shut case.

"We see the delay as being favourable," Bicknell told
Sunday Business
, he also pronounced that "it appears no material injury can be proven".

Bicknell continues to insist there is no basis for the complaint, as the product he sells cost more than the locally manufactured cement. "There is a niche market for our product, and this is currently less than 10 per cent."

Bicknell has previously said he needs to corner at least 15 per cent of the cement market to distribute the commodity profitably.

Both firms are key players in the local cement trade: CCCL, the one time government-owned company, now owned by Trinidad Cement Limited (TCL) the sole manufacturer of the product in Jamaica, while Tank-Weld is the leading importer.

Over the years, CCCL has won three anti-dumping cases after which the Jamaican Government slapped heavy duties on cement imported from Thailand, Indonesia and China.

Bicknell is hoping to break that streak.

The opportunity for Tank-Weld's entry into the cement-importation market was opened by Caribbean Cement itself, which became pre-occupied in 2008 with a US$177 million expansion of its Rockfort plant in Kingston.

Two years before, the company lost the confidence of the construction sector and the Government after it released faulty cement on to the market in late 2004 and early 2005, temporarily bringing the building sector to a halt.

The company blamed the faulty product on a breakdown in its qua-lity-control systems.

The government mandated a fix and in 2006 broke the safeguard protections for the cement maker, retired the 40 per cent safeguard duty, and opened the market to 550 tonnes of imports, facilitated by waivers on the 15 per cent Common External Tariff.

Caribbean Cement and TCL continue to fight the waivers.

The importers now have duty-free access to 15 per cent of the market, down from 20 per cent a year ago, while CCCL has a firm grip on 85 per cent.

Tank-Weld has also launched its own complaint against CCCL, alleging misleading advertising of its Carib Plus brand, and has asked for an investigation by the Fair Trading Commission.

"The word 'plus' in this new brand 'Carib Plus', amounts to a representation which immediately conjures up, in the mind of the ordinary and reasonable members of the Jamaican public, an image of a new cement product that has superior strength, relative to the regular 'Carib Cement' that has been sold over the years, " Tank-Weld contended in the letter, a copy of which
Sunday Business
saw.

It maintained that its own commissioned laboratory tests do not support such a representation.

CCCL, however, is staunchly defending its product.

"Carib Cement stands behind its products and confirms that 'plus' refers to the added benefits," the cement manufacturer said in a statement.

"Advertising of this product prior to its launch and subsequently has always clearly itemised these additional benefits."